Book Review: The Grace of the Gingko by Michael Hardesty

In The Grace of the Gingko, David Foley loses his wife through divorce and raises his boy alone. When his son is killed during the Gulf War, he moves to Louisville, Kentucky to be near his only remaining family, his pregnant daughter-in-law. She dies during childbirth, and unexpectedly David finds himself guardian of a newborn, Leisl. Like many grandparents today, he becomes a parent for the second time and raises his now-orphaned granddaughter.

David juggles the responsibilities of parenting well—including adding a dog to the family, raising a sweet young woman, teaching sex education and good manners—while surrounding himself with an all-star cast of friends and family for support. He enlists his staunch Catholic in-laws, despite his atheism, to give his granddaughter the sense of a true family. In addition, he has several good friends, including a cello player, who contribute to Leisl’s life. Frequently David handles his parenting responsibilities better than he handles his aging body and his social and sexual needs. His occasional efforts at finding a love interest are both hilarious and touching.

Hardesty presents the reader with an all-too-human protagonist in this moving narrative about beating one’s past, understanding one’s present, and confronting one’s place in the universe. Hardesty guides the reader with a deft hand through David Foley’s raging internal battles waged between his coarseness and his urbanity, his temper and his equanimity, his Catholic upbringing and his professed atheism. Definitely a five-star read. 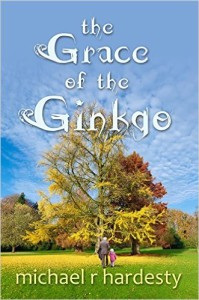 The Grace Of The Ginkgo is Michael Hardesty’s first novel. He is a graduate of the University of Louisville and Stanford University’s Certificate of Writing Program in long fiction. Hardesty is retired from his marketing communications firm, Black & White, and lives in Louisville, KY where his favorite activity is hobnobbing with his three grandchildren.

Suanne Schafer is fiction editor for Empty Sink Publishing. She completed the Stanford University Creative Writing Certificate program in 2014. Her short works have been featured in Bête Noire Magazine, Empty Sink Publishing and two anthologies, Night Lights and Licked. She is querying her women’s fiction manuscript, A Different Kind of Fire, exploring the life of a nineteenth century bisexual artist living in West Texas. She is a member of San Antonio Romance Authors, Romance Writers of America, and Women’s Fiction Writers Association.