December Boys is the second in Joe Clifford’s Jay Porter series. Just as noir as the first, Lamentation, December 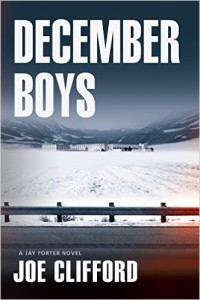 moves more quickly without a wasted word. Clifford’s prose is gritty and moody, yet beautiful, with lines that shine like a Jacob’s ladder. The New England winter, with its aching, biting cold, snow and dirty roadside slush, is a recurrent motif.

Jay Porter is a seriously flawed character with deep psychological issues that commence with the death of his parents in his childhood followed by his brother’s “suicide by cop,” which occurred in Lamentation.

He now has a nine-to-five job as an insurance claims investigator and has married the love of his life, Jenny, but can’t hold his life together. He remains haunted by the deaths of family and the guilt he feels over being unable to save his junky brother. He self-medicates with increasing doses of alcohol. Though he tries to provide a home for Jenny and his son, Aiden, she leaves him because, though present in her life, he isn’t really there.

He remains obsessed by the Lombardi case that got him in trouble in Lamentation. In December Boys, he works with Nicki, a courthouse employee (and Jay’s newest temptation) to uncover the dark secrets of the Lombardis in a new scam. His involvement nearly costs him his life.

Jay is not particularly likable but is a sympathetic character as the reader becomes acquainted with him and his many problems including PTSD, an anxiety disorder, and a relentless paranoia over the Lombardis. Porter has an underlying morality and tries to do the right thing, including not cheating on his wife, but he invariably undercuts his own efforts.

I received an advanced copy of this work in exchange for a fair review.

Joe Clifford is acquisitions editor for Gutter Books, managing editor of The Flash Fiction Offensive, and producer of Lip Service West, a “gritty, real, raw” reading series in Oakland, CA. He is the author of the books Choice Cuts, Junkie Love, Wake the Undertaker, and Lamentation, as well as editor of the forthcoming Trouble in the Heartland: Crime Stories Based on the Songs of Bruce Springsteen. Joe’s writing can be found at www.joeclifford.com.

Suanne Schafer completed the Stanford University Creative Writing Certificate program in 2014. Her short works have been featured in Bête Noire Magazine, Empty Sink Publishing and two anthologies, Night Lights and Licked. She is querying her women’s fiction manuscript, A Different Kind of Fire, exploring the life of a nineteenth century bisexual artist living in West Texas while starting her next work about a Vietnam vet tortured by PTSD. She is a member of San Antonio Romance Authors, Romance Writers of America, and Women’s Fiction Writers Association. Suanne is fiction editor for Empty Sink Publishing.