Book Review: A Canticle for Leibowitz, Haw and Dustlands

The first post-apocalyptic book I read was A Canticle for Leibowitz by Walter M. Miller, Jr. Though originally published in 1960, I read it ten years later when I started college. Set in a Catholic monastery in the southwestern United States, Leibowitz spans millennia and documents mankind’s efforts to rebuild civilization after global nuclear war, the “Flame Deluge.” In a backlash against the war, the “Simplification” occurs, in which intellectuals were killed by rampaging mobs of “Simpletons.” Books—a la Fahrenheit 451—are destroyed. Literacy all but dies out. Monks of the fictional Albertian Order of Leibowitz, a Catholic monastery in the desert of the Southwestern United States, attempt to preserve scientific knowledge until human development is again ready for it. 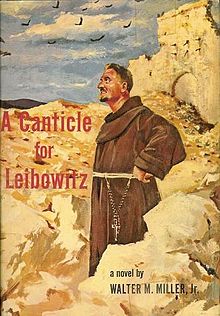 As a child of the Cold War who grew up with images of Hiroshima, Nagasaki and napalmed bodies in Vietnam on TV, Leibowitz inspired a particular dread, only somewhat offset by its wry humor. To this day, it tickles me that, centuries after Saint Leibowitz’ death, the abbey preserved the collected writings, the “Memorabilia,” that survived the Flame Deluge and the Simplification, including the Holy Grocery List that starts with the humble word “bagels.”

A Canticle for Leibowitz won the Hugo Award for best science fiction novel in 1961, has never been out of print and has been published in at least twenty-five editions. Appealing to sci-fi fans as well as the mainstream readers, it has attained the status of “literature.”

Interest in dystopic futures continues to this day. Crowds flock to movie adaptations of The Hunger Games, Divergent, and Ender’s Game. Lois Lowry’s The Giver is taught in schools. Under the heading Best Apocalyptic or Post-Apocalyptic YA Fiction, Goodreads lists 217 books. I’ve recently read two additions to this sub-genre of science fiction, Sean Jackson’s Haw and Moira Young’s Dustlands series.

In Haw, society has evolved into extremes. The wealthy Hidden insulate themselves in high-rise buildings and hire private guards for protection. Citoyens make up the bulk of society, scrabbling for their daily necessities and drinking heavily, since alcohol is safer than the polluted water. Some even say citoyens are bred to absorb the pollutants that permeate this world.

Lucas, a bioengineer and father, is on the lower end of the “haves.” He has a job, a home (an abandoned villa), and salary enough to eat fairly well. After the death of his wife, he raises his son Orel alone. When decreasing purity of water and increasing violence force them to leave this pitiless environment, they journey to a rural village and face new challenges trying to raise salmon for food while worrying about the nearby nuclear reactor. 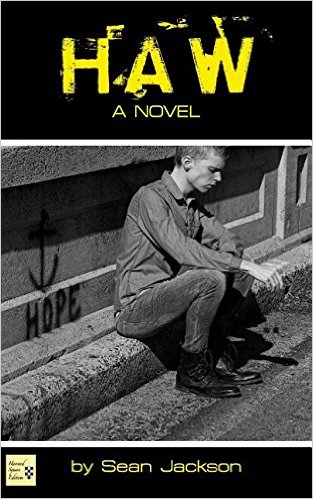 The prose is thoughtful, well written, and contains some unique imagery. Haw is told from an omniscient point of view so the reader sees bits of everyone’s thoughts, which is one of Haw’s strengths as well as its weakness. A review on the back cover says “Haw features an LGBT theme.” For most people, the literary theme is the main topic of a novel whether stated directly or indirectly. In Haw, LGBT issues were mentioned in passing and certainly never reached the point of becoming a major thematic presence. This is where the omniscient point of view becomes a drawback. Had the reader identified more with Orel, the gay son, the fact that he was gay may have made a difference in the book. The LGBT issues may not have carried the weight of an actual “theme” but might have become a motif. For instance, the reader doesn’t know if Orel has come out to his father, Lucas; if Lucas knows or suspects his son’s homosexuality and, if so, how he feels about it. The reader doesn’t even know how Orel feels about his own sexuality. The reader sees only a glimpse of schoolboy homophobia when Orel is beaten by his classmates. Jackson missed an opportunity here and could have done better justice to the character, Orel, his psyche, and his lover, Nico.

In contrast to the more formal omniscient voice of Haw is Moira Young’s Dustlands series (Blood Red Road, Rebel Heart, and Raging Star). Young, writing in very close third person voice, captures the unique voice of her protagonist, Saba. The reader intensely experiences Saba’s perceptions and feelings. She’s straightforward and doesn’t hold back about her strengths or her faults.

Young uses unique spelling conventions to show how much society has changed. Usually I find this sort of lexical gimmick distracting, but here it is well done and consistent with Saba’s voice. For instance, people still count the seconds between a lightning flash and hearing the thunder by saying, “one Mississippi, two Mississippi…” The function of the words has stayed the same, but the spelling and meaning of them has changed to “one Missus Ippi, two Missus Ippi, etc.,” indicating that while formal titles like “Mr.” and “Mrs.” have survived, the concept of Mississippi as a river and state has long been lost.

Saba, the protagonist, has grown up in Silverlake, a dried up dustbowl of a wasteland, barely surviving by scavenging the remnants of the 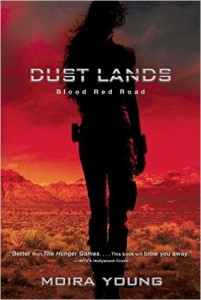 “Wrecker” civilization. The deaths of her parents destroyed her once-happy family. When four horsemen capture her twin, Lugh, Saba embarks on a quest to rescue him while caring for her little sister as well. Caught up in a band of renegade female warriors, The Free Hawks, Saba learns she is a skillful fighter and a tough opponent. She becomes the “Angel of Death” because she never loses a cage fight. Her loyalty to her brother Lugh and to Jack, her lover, lead to a world redefining climax.

A Canticle for Leibowitz, Haw, and Dustlands are well worth reading, tremendously more interesting and intense than Hunger Games and Divergent. Haw is the more thoughtful of the two newer novels, providing a glimpse of a future in which Lucas wonders “What good does it do to have a bottle of wine and a good meal…when someone is soon to slit your throat.” A well-written debut novel with excellent world-building and harrowing images of our future, Haw will haunt the reader. Dustlands is action-packed and worth reading for its unusual and exciting voice and strong female protagonist, a page-turner you won’t be able to put down. Those who missed A Canticle for Leibowitz should certainly check it out. The most intellectual and complex of these three novels, Canticle is elevated into the extraordinary by a unique combination of symbolism and theology. Its visions of humanity’s repeated rise and fall over millennia has lead Canticle to become a true classic in post-apocalyptic literature.

Suanne Schafer is a retired family practice physician living in San Antonio, Texas. She completed the Stanford University Creative Writing Certificate program. Her short works have been featured in Bête Noire Magazine, Empty Sink Publishing and two anthologies. She is a member of the Women’s Fiction Writers Association. Suanne also is the fiction editor for Empty Sink Publishing.