Book Review — Beyond the Blue, by Tim McBain and L.T. Vargus

I’ve been in love with L.T. Vargus and Tm McBain’s “Awake in the Dark” series since I read the advance reader copy of the first volume. In protagonist Jeff Grobnagger, I found a smarmy, sarcastic, and cynical protagonist I could relate to. The series, which I have previously compared to Lost, is now complete with the release of the fifth volume, “Beyond the Blue.”

Let me repeat: I love this series. Which makes what I’m about to say next all the more difficult.

Overall, I was disappointed by this book.

Now, it could be my fault. Perhaps I went into it with unrealistic expectations about what questions would be answered and how much the authors would reveal about the world they’d created. (The answer? Not much.) 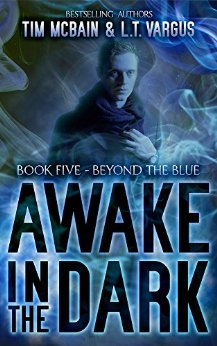 I need to be fair, so let me start with what impressed me most about the book. The biggest thing that stands out is just how much the authors have honed their writing chops since their freshman novel, Casting Shadows Everywhere. Simple descriptions of the crunch of snow transported me to their fictional world, and the improvement over previous entries in the series is impressive.

Unfortunately, much of this loquacious prose makes its way into long, overdrawn monologues that Jeff has with himself about the nature of life, relationships, and love. This was the final book in the series—I expected some action! But instead, I got a lot of Grobnagger waxing philosophical about annihilation of the self. And Dots. Lots of Dots.

I feel like a terrible person writing this review. I’ve loved the “Awake in the Dark” series and the authors have been more than kind by granting us multiple interviews and being just plain nice people. But I just didn’t enjoy Beyond the Blue the way I had hoped to or the way I had enjoyed other books in the series.

That being said, it is clear that Vargus and McBain have the talent to continue churning out well-written books. Next up, I will delve into their new series, “The Scattered and the Dead.” Because regardless of how it ended, my ride with Jeff Grobnagger was one of the most enjoyable I’ve had in my entire reading life, and I look forward to more from these promising authors.