Red Demolition, a 16-poem chapbook by Juliet Cook, is an almost-primevally surreal portrait of a woman swimming in the murky aftermath of a broken relationship. The guttural grief and visceral imagery explode across the pages to create a jaggedly accurate vision of the nightmare life becomes when there is nothing solid left to hold onto. Cook’s poems create a bloody, but beautiful, storyscape of those transformative moments in a woman’s (or really anyone’s) life when every breath is agony, when every mundane action is a bad-acid-trip flashback that cuts like a surgeon’s scalpel.

In the opening poem, “Head Twists” we find the speaker faced with the fracturing removal from a perceived happily ever after. The rug has been pulled out from under her feet, and she acknowledges a lack of control that has descended with this new reality: “I thought I was real until I became nothing but swerving.” This line resonates as both a universal accepted emotional response to a romantic breakup and as an initiating stone for the tone that ripples across these pages. Cook has created a manic blur of a speaker, a ghost of a woman who sees herself in the assumed reflections of some common and somewhat catastrophic objects. In “Head Twists” we see the first of these reflections as being a “headless manikin.” The speaker is looking at herself in such an image, pondering if such a headless “manikin might be more level headed than the current twisting me.”

In “Why I Dye My Hair Red” we see the speaker assume the reflection of “a Bloody Mary,” a spilled drink. The metaphor is subtle as a sledgehammer: “don’t drop me, don’t drop me,/but they always do,” and we, as readers, are falling and breaking right along with her. We continue to sink and break and drown with Cook as the path gets darker. In “Vintage Pom Pom Underwater” the speaker sees herself as “A mummified octopus . . . like a broken balloon who suddenly turned old.” The murky waters of this image is somewhere most women drown. Aging is something we, as a gender, have been trained to fear. This image of a deflated, wrinkling form, is a suffocating force that almost forces readers to pause, and consciously take a steadying breath.

The idea of fear takes a different turn in the later poems. The speaker, while still disjointed and thrashing about in a bloody miasma of poisonous memories, seems to take on a more clinical calm, begins to dissect the mess she has become. “It starts with a multi-colored glitter dress lifted up high/to show thighs wrapped with garter belts made out of garter/snakes.” This opening image from “Love Can Be a Chokecherry” sets the perfect, if overtly biblical, stage for the subtle undercurrent of fear that echoes through the remainder of this collection: that she let this happen. The fear of responsibility is palpable: “She knows another nightmare is coming.” The fear of knowledge and deliberate ignorance of the same is also addressed in “Insecticide Dye Job”: “They poison you and then pull themselves out.” This particular poem also holds the fear of the future in its opening lines: “Nobody else can keep you inside them long enough to glue you/back together. Nobody wants to anyway.”

Finally, while the final poem, “Not another Replication,” hints at survival, potential desire to move forward—“I need to keep drinking red glass/after glass so my love doesn’t turn into mildew”—as readers we are left with the image of the speaker being as broken as the reflections she donned earlier. Cook drives this home in “Vintage Pom Pom Underwater” and “Blue Marriage” respectively: “I’m sinking down inside my own tiny body bag again. Alone alone alone.” “Love is the color of dead blue skin silently screaming.” As readers we heard her blue skin screaming; we felt the body bag slowly zipping closed. 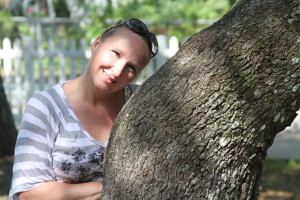 A.J. Huffman has published twelve full-length poetry collections, thirteen solo poetry chapbooks and one joint poetry chapbook through various small presses. Her most recent releases, Degeneration (Pink Girl Ink), A Bizarre Burning of Bees (Transcendent Zero Press), and Familiar Illusions (Flutter Press) are now available from their respective publishers. She is a five-time Pushcart Prize nominee, a two-time Best of Net nominee, and has published over 2500 poems in various national and international journals, including Labletter, The James Dickey Review, The Bookends Review, Bone Orchard, Corvus Review, EgoPHobia, and Kritya. She is also the founding editor of Kind of a Hurricane Press.www.kindofahurricanepress.com.