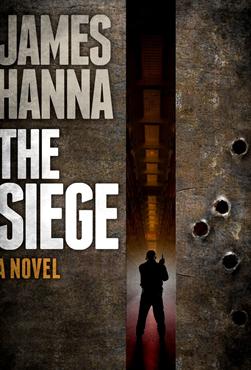 The American prison system can be likened to a labyrinthine colony built by army ants on acid. Numerous corridors and hallways connect haphazardly in a fashion that hardly makes sense, threatening to undermine the stability of the entire structure. The correctional officers who work any given facility often find themselves caught between the interests of the inmates and the interests of commissary companies, and their interaction with unions, the top brass and prison gangs is dizzying, complicated and fraught with danger.

From this fragile relationship is born “The Siege” (Sand Hill Review Press, 2014) a novel by former correctional officer James Hanna. In “The Siege,” Hanna, who draws on his own experiences for inspiration, reveals the convoluted relationships between all the major players on an Indiana penal farm.

The Farm, as it is referred to in the book, resembles what most of us might think of when we think of a prison: a penal institution where inmates are assigned work detail for petty wages based on their behavior and skills. The inmates and the correctional officers working at the facility jostle for control, but the reader soon finds that control over the facility is dependent on allegiance with unions, the policies of the commissary company—which supplies prisoners with cigarettes, potato chips and other sundries—and political alliances formed at the top ranks of the organization.

Caught in the middle of this intricate web of power is Tom Hemmings, an unlikely protagonist, if only because he doesn’t view himself as one. On a cold day one November, Tom finds himself at the center of a standoff: the inmates have taken over the laundry dorm and, due to a tenuous relationship between himself and an elderly inmate named Chester Mahoney, Tom has been targeted by the prisoners as the one person they will talk to during negotiations.

As Tom struggles to come to terms with the reality of the conflict and his role, he also struggles to find himself outside of his working life. Tom’s string of one-night stands has not necessarily left him unfulfilled, but even he admits that they don’t offer the satisfaction they once did. A relationship blossoms with fellow officer Sarah Baumgardner, who is coming to terms with a failed relationship and known, by her own admission, as an “easy lay.”

The bond between Tom and Sarah strains at its leash just as the situation at the prison begins spiraling out of control. Throughout the book, Tom navigates the various parties involved: the top brass, the prison gangs and the violent rivalry between unions that highlights just how difficult it must be for anyone working in this system to get anything done at all.

Hanna does an excellent job of laying this all out in a way the reader can easily understand. He doesn’t hold back on using slang many of us are not familiar with—rather, he provides a glossary in the back of the book that you can use if you don’t know what a “road dog” is, or if you’re wondering why the United Auto Workers and the Teamsters are involved in the prison system in the first place.

The map at the beginning of the book provides a nice illustration of the prison, the Farm and the area surrounding it. For those of us who normally think of a prison as just a building fenced in by razor wire, this illustration serves as a reference point for the various places where the action of the story takes place.

And there is plenty of action to be had. While much of the book revolves around Tom’s recollection of the events that led up to the standoff, the siege itself is a wild firefight fraught with backstabbing, deals gone wrong and a climax that questions the very nature of sanity in the face of peril. Once Hanna establishes the characters, the scenery and the nature of the standoff, the book moves at a quick pace, often forcing you to reread a section in case you missed a crucial detail in the frenetic action.

“The Siege” offers a terrifying glimpse into the life of a prison employee, the lives of the inmates and the structure of the penal system in general. The intricate political web at the heart of the system is treated as disturbingly mundane: while the characters complain about the situation, they do so with the air of someone bitching about their boss—as if they have become so desensitized to the situation that they don’t fully recognize the absurdity of it.

Because of this, “The Siege” stands as one of those excellent books that immerses you in its universe so fully that, at the end, you feel as though you have some stake in the system and in making it better. And while I do not think that was Hanna’s intent with the story, it speaks to his storytelling prowess that he has created a world that draws you in so fully as to make you take up arms against an organization that, previously, you had no idea existed in the first place.

For more on James Hanna, including how his own experience in the judicial system shaped his work on “The Siege,” see our interview with him in this issue. “The Siege” is available now on the Kindle, and the paperback will be available through Sand Hill Review Press in June. For more of Hanna’s writing, you can read his short stories, “Call Me Pomeroy” and “A Second, Less-Capable Head,” right here on Empty Sink Publishing.

E. Branden Hart is Executive Editor of EmptySinkPublishing.com. He lives and works in San Antonio. His fiction has been published in Toasted Cheese Literary Magazine, Down in the Dirt Literary Magazine, and Shades and Shadows: A Paranormal Anthology, which is available on Kindle and in paperback by XChyler Publishing.