I’m not a fan of anything that idealizes love or romance. Stories about people who “just can’t live without each other” and “get lost in each other’s eyes” are all bullshit to me—there’s nothing real about them. For me to enjoy a romance novel, it has to be unique and it has to be real. I have to feel like the characters could actually exist in the real world. They have to fight. They have to doubt their love occasionally. They have to act like people actually act.

At first, I thought The Waiting Room, by Alysha Kaye, was going to be a story about idealistic, unrealistic love. However, much like Audrey Niffeneger’s modern classic, The Time Traveler’s Wife, it had a decent twist on the traditional love story, so I kept reading. After following the main characters, Jude and Nina, through time, the universe, and a relationship spanning centuries, I’m glad I did. There’s good stuff here: Kaye takes us on an adventure that reminds us that love can be hard, love can be lonely, and love can be heartbreaking—and that’s what makes it totally worth it.

The premise is simple: Jude and Nina, husband and wife, are madly in love with each other. Jude shuffles off this mortal coil too soon, though, when he is killed in a car accident in his early thirties. Nina mourns his death, picks herself back up, remarries, has children, grandchildren, and, in general, a happy life. 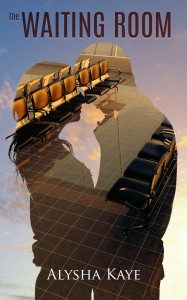 We know all this because Jude is watching it all happen. Not in a creepy way, though. See, after he dies, Jude wakes up in the Waiting Room: a sterile place where souls wait to begin their next life. Typically, a soul shows up and, in less than an hour, their name is called. They walk out the Waiting Room door and into their new life.

But Jude’s name doesn’t get called. Not the first hour, not the first day, not the first year. In fact, Jude waits over fifty years in that room. He meets an astounding array of people in his time in the Waiting Room—even has a chance at love—but he spends most of his time watching Nina, right until the moment she dies and shows up.

All of this happens in the first fifty pages of the book. I’m not going to get into what happens next, but it is not your typical love story. Kaye explores the many mysteries of the universe throughout the story and raises some very interesting questions about life and the nature of love. Overall, the book was a pleasure to read, and I would recommend it to anyone interested in an unpredictable story about love after death and the nature of life.

Technically, the book is pretty solid. I noted very few true typos during my read. There were a few grammatical issues and, overall, I think the book could have used one more line edit. It’s billed as a novel, but is really more of a novella and clocks in at just under 50K words. But that’s the perfect size for the story it is telling. I think some people might be put off by the ending, which comes on quick and doesn’t wrap things up in a nice, neat bow. But I loved the open-ended nature of it and thought it was perfect for the story—and in a way, it was very comforting. You’ll see what I mean when you get there.

As someone who isn’t typically a fan of romantic fiction, I’m glad Ms. Kaye reached out to me for this review. She hit on something unique with this story, and I look forward to seeing what she comes up with next. In the meantime, pick this up if you’re looking for an interesting twist on the traditional romance story—and one that hits the spark of reality that so few do these days.

E. Branden Hart is Executive Editor of EmptySinkPublishing.com. He lives and works in San Antonio. His fiction has been published in Toasted Cheese Literary Magazine, Calamaties Press, Down in the Dirt Literary Magazine, and Shades and Shadows: A Paranormal Anthology, which is available on Kindle and in paperback by XChyler Publishing.