Book Reviews (Poetry): Sausalito Poems 1959-1961 and The Nineteen Steps Between Us

L.G. Corey, now eighty-one years of age, states in his preface of Sausalito Poems 1959-1961, that the fifty poems he presents here are a kind of memento mori to those transformative years he spent in Sausalito learning about sex, drugs, and being a man. As one would expect for the generation during which these poems were written, there’s a Beat mentality influencing many of the themes present. Sexuality, spirituality, consciousness—all are just questions posed in the fog of day or the shadow of night. Corey’s poetry is spare, his rhythm exacting. This is a collection more about questions than answers; about moments in time as seen through the hazy lens of innocence. There is nothing transcendent here. But for those who don’t mind a seat on a psychedelic bus ride down the back alleys of misspent youth, this a trip you just might find worth taking.

You can purchase Sausalito Poems here. 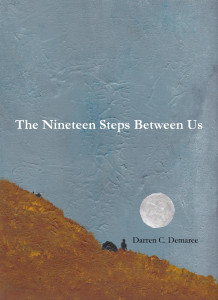 The Nineteen Steps Between Us by Darren C. Demaree

The Nineteen Steps Between Us charts a course that begins with Demaree questioning his purpose and ends with his heading home to his family, as if all the questions that preceded need never to have been asked. It’s a puzzle, to be sure, but, like life, there are no easy answers. Demaree asks his questions, he struggles to bridge the gaps between the internal and the external, to find peace in that interface where we, as mindful human beings, try to co-exist, to communicate, to navigate, to love, and he does this in a minimalist way that is both simple and yet complex.

This is a very introspective collection; much is internalized here. Demaree’s “us” is universal and shifts from lover, to friend, to father, to mother, to the universe at large. There is rarely a sense of place in his words, only a nebulous feeling of isolation, and a palpable yearning as he desperately searches for truth over the course of these internal encounters.

Demaree’s stylistic structure (brief two-line stanzas for the duration of the poem) is, at first, engaging and forces the reader to look for additional meaning in the islands of words, but, ultimately, after reading several of these segmented prose poems in succession, the stylistic choice becomes tedious. This is a collection best savored one or two selections at a time.

You can purchase The Nineteen Steps Between Us here.

Kurt Newton’s fiction and poetry can be found at Syntax & Salt, Zetetic: A Record of Unusual Inquiry, Intrinsick and Empty Sink Publishing.