W. Jack Savage’s art has appeared in many issues of Empty Sink Publishing. In this issue, we have some new pieces from him, and asked him to answer a few questions for us about art, life, and Vietnam.

Empty Sink Publishing: Mr. Savage, thank you for taking the time to answer our questions. Let’s start with a little about you: you’re kind of a renaissance man. You paint, you act, you’ve published novels, you’ve been a paratrooper and a helicopter door gunner, and you spent a majority of your adult years in broadcasting. Let’s start there: tell us a little about what drew you to broadcasting.

W. Jack Savage: I’d thought of it before but someone told me what a wonderful voice I had and that I should be on the radio. I began broadcasting school after that.

ESP: You also spent time in Vietnam. Can you tell us about how your experience in the war shapes your art? 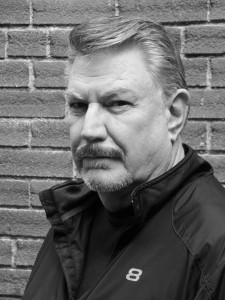 WJS: That’s a tough question. It’s a part of me, I suppose, because I lived it, and yet apart from a few stories I’ve written peripheral to my experiences, I can’t say that it takes a significant part in shaping much of anything in my life. As far as anything traumatic goes, school for me was much worse than the war.

ESP: We’ve published several of your paintings, and two very distinct styles emerge. One style, as seen in “The Merchant and His Consort,” is typified by very defined lines and separation of color. Your other style, seen in one of my favorites, “The Apparition Wore Robes,” is much looser and more relaxed: colors blend together, but still form the rough picture of your subject. How do you approach such distinctly different styles—do you take one style when you’re in a particular mood, do you choose at random, or is there another method to your approach?

WJS: Before I enlisted in the Army, I visited the Keane Gallery in San Francisco. It struck me that with his and his wife’s success, they were then locked into painting faces with their signature expressive eyes. It kind of scared me that success like they enjoyed limited any chance for them of moving out of that style and letting their work progress and evolve. A few gallery owners have told me my different styles make it hard to feature my work and that I should concentrate on one style or another. I won’t do that, so I doubt I’ll get a chance to show someday. That’s less important to me than it once was.

ESP: I’ve noticed that people appearing more and more in your paintings, and I love it. What at first looks like a dreamscape of different colors quickly takes form when you realize that there are tiny little people interacting with the world you’ve created—it’s like the Savage version of a classic landscape. Did anything in particular drive you to start including humans in your paintings?

WJS: I suppose so, yes. At first I just wanted to include something in my landscapes that seemed to be missing in some others I’ve seen…scale. I remember being moved by a scene in Lawrence of Arabia where Bedouins crossing a small portion of the desert appeared almost as ants.

ESP: How often do you paint?

WJS: Almost every day but at least four times a week.

ESP: Where do you paint?

WJS:  At the dining room table.

WJS: I’d have to say my third novel, The Children Shall Be Blameless is something I’m rather proud of. Of my short stories, Yellow Food and Sally’s from The Petorik Thesis and Tales of the Global West came as close to what I intended and anything I’ve written.

ESP: Aside from the obvious, what is the biggest difference between the creative process when it comes to painting versus writing?

WJS: In painting I collaborate with my art. For example, if I begin with a certain idea and that isn’t working, I now continue as if the art on the page has it’s own sense of what it might like to be. My writing, at it’s most fun, is similar in that when my character walks down the street, I have no idea which way he’ll turn at the corner or what he might find when he does. I’ve gone away from that somewhat and I think it’s hurt the creative process…at least for me.

ESP: How often do you write?

WJS:  Sadly, less and less often. I’m hung up on a novel I can’t seem to finish and it sort of has me mired in the mud.

ESP: And on top of all that, you are an actor. Who is your favorite playwright?

WJS: I don’t have one really…each present their own challenges for actors and the fun is trying to perform their vision ‘as written.’ It is for me, anyway.

ESP: What is the favorite role you’ve performed?

ESP: When it comes to creative expression, what is it that you find most enjoyable about acting?

ESP: What authors or artists have the biggest influence on you?

ESP: When did you first start writing?

WJS: Grade school, actually. I wanted to tell stories early on. They were a form of escape as well.

ESP: When you write, what do you use the most: Word processor, typewriter, or pen and paper?

ESP: If you could ask for a single piece of advice from one person, living or dead, who would it be and what would you ask them?

WJS:  John Dos Passos. Question; “Was it worth it or did you have no choice?”

ESP: You’re given the opportunity to have dinner with one living author or artist. Who would it be and where would you eat?

ESP: If you were stranded on a desert island and could only take one book with you, what would it be?

ESP: If you could give one piece of advice to aspiring artist, what would it be?

WJS:  If you’re an artist, fine. Don’t let anyone tell you you’re not.

ESP: Thanks again for taking the time to answer our questions. One last one: What’s next for you—any projects in the works we should be aware of?

WJS:  I sure hope so, but not as of this writing.