Book Review: Back in Black, by L.T. Vargus and Tim McBain

If you are a regular reader of our magazine, you’re probably familiar with my current obsession with the Awake in the Dark series of books by L.T. Vargus and Tim McBain. (If you haven’t yet, read my reviews of the first three books here and here.)

I’m not going to recap the story here—anything I say will be a spoiler for anyone who hasn’t read the first three books. What I’ll say instead is that while I enjoyed the latest installment, Back in Black, it’s probably my least favorite of the series thus far. Let me explain, and let’s start with the good stuff.

The writing, for the most part, is on point and stands up to the rapier wit and sarcasm of the earlier books. There’s one particular paragraph that is such an incredible description of the futility of obsessive self-evaluation that I actually put the book down and emailed Tim and L.T. to share my thoughts about it. So, from a technical and emotional perspective, the writing is on par with quality from the earlier books in the series. 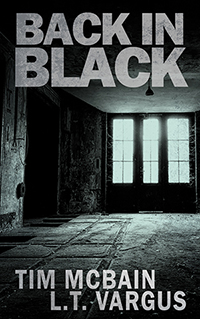 The story itself is a great ramp-up to the next book in the series. As always, Vargus and McBain leave us with a killer cliffhanger at the end of this one—in fact, despite my opinion about the book as a whole, the ending is the best in the series yet. You don’t put this book down and think, “Excellent ending. I look forward to the next installment.” You put it down and reach for a bottle of whiskey and some Xanax to help calm your nerves.

That being said, there were a couple of things about Back in Black that bothered me. One was the main character, Jeff’s, attitude throughout much of the book. Without giving too much away, Jeff has always been a pessimistic, sarcastic guy, and he’s recently been through some really crazy stuff. But in BIB, he’s a little too pessimistic. Don’t get me wrong—it makes sense that this character would feel the way that he does. But it’s annoying. You feel for him in the beginning, but slowly, you find yourself wanting to shake him and tell him to just get over it already.

Slightly related, I got turned off by some of Jeff’s internal monologue, which is a big change for me. I’ve always found Jeff’s internal monologue witty and acerbic, but there were times in this book where he just came off as whiny and melodramatic. And while I appreciate what Jeff’s been through, I’ve never thought of him as they kind of guy who whines about his lot in life. There’s even one place where I took a note saying, “Jesus Grobs—get some Prozac.” It’s just a little over the top.

Fortunately, I found neither of these issues pervasive. Ninety-five percent of the book was the same quality writing and story I’ve come to expect from these authors, and it was one hundred percent engaging. Like the first three books, it was impossible to put down. The next book is the final in the series, and I await it with bittersweet anticipation: while I can’t wait to get some long-awaited answers to questions about what’s happening, I don’t want to say goodbye to this story or these characters. Hopefully, Vargus and McBain have more projects waiting in the wings, because they have the chops to go a long way.