Trying to describe an experience not felt firsthand is tough 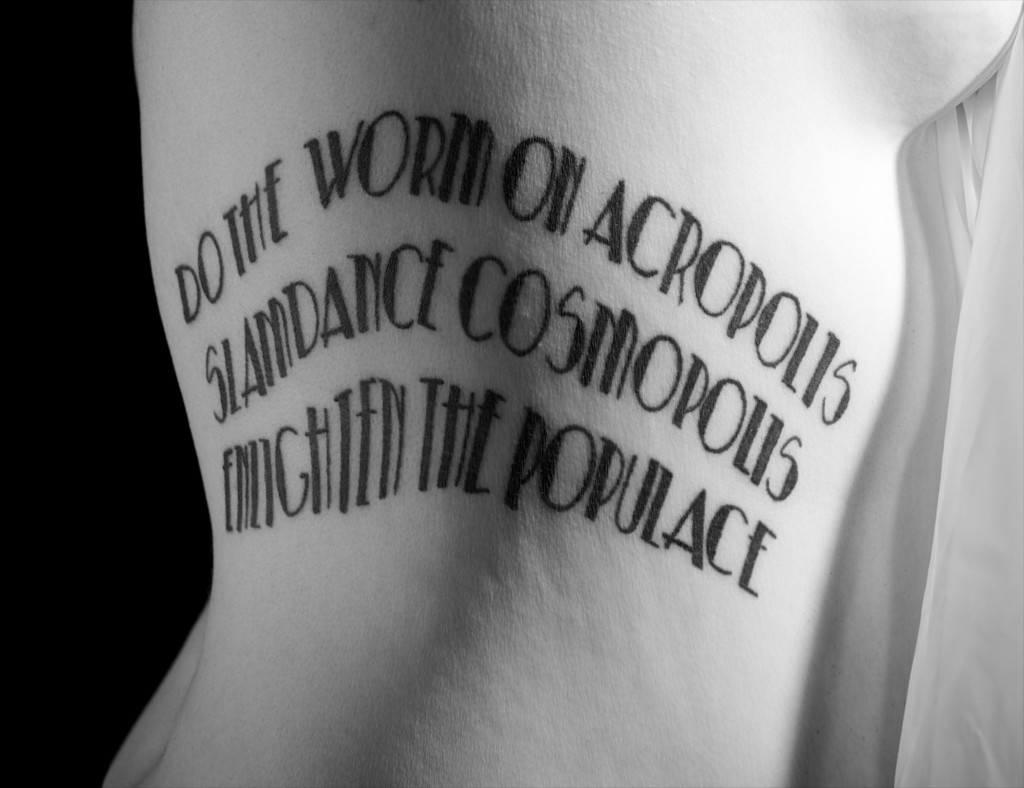 Gently wiping away ink and blood
Shed as an intimate gesture

Touching her completely across the upper torso
Working masterfully while inflicting mixed doses of pleasure, pain
Closely holding her skin in new directions
Breathing across her
Adding to the intensity

A gift that will last a lifetime

About the poet: Travis Laurence Naught is an author who happens to be a quadriplegic wheelchair user. The Virgin Journals (ASD Publishing, 2012) and Still Journaling (e-book, 2013) are full-length volumes of his poetry. Individual poems and stories by Travis have been published in print (Lost Coast Review, Freshwater Poetry Journal, etc.) and online (BALLOONS Lit Journal, Deadman’s Reach, etc.). Check out naughtapoet.blogspot.com for more information and original work by Travis!

About the model: Jamie Junction has been a multimedia performance artist and figure model for 14 years. Artists she has posed for include Jack Lantz, Brad Scupina, and Steve Knutson. Her recent posing with surrealist painter Tom Quinn explores the issues of women in popular culture and fairy tales. In 2014, Jamie was hired at Gonzaga University as their first nude figure art model. Photographers she has posed for include Mark Anthony, Sarah Benton, and Stina Rae. As an activist, she has worked against censorship in books and figure art, HIV prevention, education, women’s rights, free healthcare, and other causes. She likes to write, produce short films, and collaborate with her weirdo friends!

About the collaboration: Travis and Jamie frequently attend a weekly poetry open microphone event in Spokane (Broken Mic). After one of the readings, Jamie regaled a number of the poets in attendance about a gift one of her friends bestowed upon her. The Allen Ginsberg words (placed on Jamie’s side using ink from black Japanese tree bark) are intended as a commemoration between her, activist and writing friend Ryan Weech, and Jeff Forte. It was important for the tattoo artist to remain anonymous, as they are still employed and working in traditional Americana and Japanese styles. HIV does not have to mean an end to professionalism or intimacy.