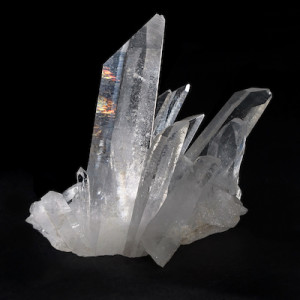 Take the problem, the crystal enigma
you’ve flipped but cannot make heads or tails of.
Hold it firm and turn it upside down
and in the inversion, catch a lucky glimpse.
The facets right themselves, a sudden sense
of order in the chaos becomes clear.
And you can name it, solve it, readjust
it so its natural use as a prism
emerges. If you’re lucky. If it was a prism.

If it is too big and heavy, though,
to be held and turned, then try to turn yourself.
Stand on your head, circle left three times
or circle it, if there’s room, climb on top, crawl beneath,
if no room, at least stay awhile and blink—
Do what you can, that is (except give in),
to see, and you shall see. I did, I think.

I have known people in this problemed life
who have shown me this process. I did not
know if they were lucky or if they were cursed
with being different. Then I’d catch a glimpse
of them through an inversion, found them kind,
and through their crystal enigmatic eyes,
their lives of process, ordering their crises
and chaos, and as quietly as dawn,
I’ve felt I too can turn into anything
and seen them for the prisms that they are.

The glass wall you perceive composes me
is made of flesh, experience and blood,
plus many revolutions of reflection
reglazed in suns and times. There’s not one wall
but many. Blink. Turn. Move behind,
beneath, upon, …hold me in your hands
and shake me, if you will—at the very least, stay
awhile to enjoy the properties of the glass.
It’s smooth and cools. And if you’re lucky, you
might glimpse—as I did back when I was you—
a bit of everything, that you can turn
to anything, even to what you are.

IN A FRAGRANT HOUR

Referring to the “blossom
of the dark and the night,” I
meant the velvet-petal thinness of a starred or unstarred sky
where, like pollen swathed in petals, there’s an incubating
implicit in the sitting, wandering, wondering, and waiting:

All senses are engaged and caressed. The sound
in the distance, the desultory whirs and calls,
are trucks, coyotes, echoes in the halls,
motors spinning, prowlers searching, vortexes swirled round.

In the darkness, an array like a garden I wade through,
the depth is not a depth but so like a depth:
the earth’s not simply soil, the air’s not singly air,
the fire’s cold, the water’s still, the all’s as old and new
as the seductive, reproductive time when you
were there.

And then you are again, supine or prone,
outdoors or indoors, sandwiched between
everything I’ll ever see and have ever seen,
as effectively in tandem as when a soul’s alone—
in different ways, though, for I tend to dream
more, watch less, depending how circumstances seem,
swallowed by a spiral, in a fragrant hour,
like an insect investing
in, or resting
in a flower,
summoning
something
awesome
from an unknown
power.

as gently as a first kiss,
aaaexpansive as the skies,
bright as a loved one’s promise,
aaacelestial in size.

Last week I saw a glow, just
aaainside a cherished eye.
A kiss dissolved it, though, just
aaathe way that rainbows die.

It could have been the raven hair that made
him feel like Theseus: To rescue from
the maze along a winding, bright and gold-
en thread. How hot that day. How hot that night,

for he deposed the shiny shield of sense,
unlike Perseus, to sneak an un-
reflected peak back at the dark coiffure
of his beloved and saw there only beauty,
the snakes of guile invisible to him.

But he was struck, and since the rescue and
the meeting of their eyes, he has been stuck
in that position, quickened to the core,
unable to move. And he calls it Love.

Beware the beckoning beam of a seducer!
Where a citadel has been commissioned,
a snake nest on a monstress’ head is almost
guaranteed to sit concealed behind
some panel, sure as the seeming gratitude
for the rash acts of a champion is so warmly
greeted, invariably misconstrued,
as luscious, warm, and unrestricted
interest.

With his first collection of poetry, Manhattan Plaza, James B. Nicola follows poets Frank O’Hara and Stanley Kunitz and humorist Robert Benchley as a New York author originally from Worcester, Massachusetts. His second collection, Stage to Page: Poems from the Theater, will be out in 2016. He has been widely published in periodicals including the Southwest, Atlanta, Lullwater and Texas Reviews, Rattle, Tar River, Lyric, Nimrod, Blue Unicorn and several journals in Canada, the UK, and Europe. James won the Dana Literary Award, a People’s Choice award (from Storyteller), a Willow Review award, one Rhysling and two Pushcart nominations, and was featured poet at New Formalist. A Yale grad and stage director by profession, his nonfiction book Playing the Audience won a Choice award. Also a composer, lyricist, and playwright, his children’s musical Chimes: A Christ­mas Vaude­ville premiered in Fairbanks, Alaska, with Santa Claus in attendance, opening night. Visit sites.google.com/site/jamesbnicola.