Years ago, during much better times, I made my way to Paris. For days I sat on a bench in Montmartre, surrounding myself with artists, while at night I crawled under a bridge and dreamed of Picasso, Henry Miller, and Rilke. Broke, but in Paris, I believed I knew what it took to prop an image up on an easel in that famous square—a watercolor, a caricature, a portrait for sale.

The street urchins, with their drawing pads, their ink pens and pencils, wore wool gloves with the fingers torn off, for it was cold in Montmartre, cold in November. They would accost, provoke, beg, do anything really, to sketch someone’s likeness for a handful of coins or a bowl of soup. With my pocket-sized journal and number two pencil, I studied the historic buildings and the gas lampposts and said to myself, “I am home here.” I will never forget the feeling of cobblestones under my feet and the smell of fresh bread in the air, the moment I placed a mark on a fresh sheet of paper and then another, while the locals who lived by this trade looked on and grew incensed. What does he think he is doing? Is this merely a game to him? We are not pretending out here. Can’t he see that it is freezing?

One afternoon a particular Frenchman, a jaundiced sort of fellow, tattered and unkempt, eyed me from across the courtyard. Perhaps he was in his late thirties; perhaps he had been in the square for over a decade. I remember how quickly I sensed his hostility, the very moment he pulled down his wool cap, stepped over to me, and said, “Let me take a look, American.”

Immediately I felt like a fraud. I was a fraud. I handed him my sketchpad, or rather, my spiral journal. From where I sat, on my wooden bench, I had to look past him to the building that had caught my eye.

Standing before me, he turned and studied its lines. “This is what you see?” Apparently it never occurred to him to speak in French. 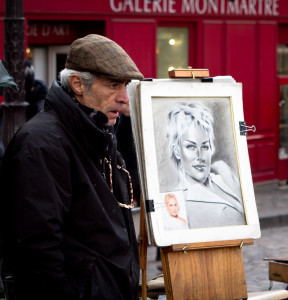 He held on to my notebook and would not give it back. “What do you want for such a masterpiece?” Laughing, he reached into his pocket. “Here. Is this about right, American?” He tossed a coin at my feet.

“Haha, well, yes,” I squeaked out nervously. Then I rose, hoping he’d sense I’d had enough.

But he only came nearer. With his rage clearly boiling, he grabbed hold of my right arm. Prying open my hand, he slapped a charcoal stick in place. Quickly he spun me around to face the structure from an entirely different angle. “Look at it.” Cupping his hand over mine, he shoved his own sketchpad in front of me. Aggressively, he whipped my hand back and forth, back and forth. “Always work quickly. It is the only way to truly see.”

I tried to pull away, but he was strong, willing to fight.

“Now do you feel like an artist?” He still forced my hand.

“Yes, yes, I do.” I managed to break free. The image we’d sketched remained in my hands.

“Take that to America. Tell them you have trained in Montmartre.” He reached inside his long tattered coat and took out the spiral notebook he’d taken off me and tossed it into the gutter. “We do not play at art, American. Go home.” He reared back his head, spat on the notebook, and walked away.

That night I went back to my bridge, gathered up my belongings, and made my way to the train.

Perhaps I am still playing at art.

Dan Corfield teaches writing at Golden West College in Huntington Beach, California. His fiction appears in various literary journals, and his poetry can be found in Beside the City of Angels: An Anthology of Long Beach Poetry. He enjoys surfing and playing beach volleyball in his spare time.