My boss pulled me into his office so he could give me crap over something. “Hendry, we got a disturbing complaint against you.”

A job in a bookstore should not be this hard. We’re one rung above a library. Plus, there’s something emasculating about someone talking down to you when physically they have to look up at you. My manager was about five feet two inches and about six inches wider than he is tall. The laws of nature had found their match with capitalism and capitalism’s demon child, retail. Only in such a system could men like him be king. 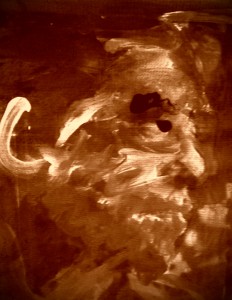 “Reflections on Hank” by Adam Kluger

“You can’t sell teenage girls Bukowski.” He wanted to yell, but he waited for me to react before he did that.

I gave him nothing.

“From now on, when a young woman comes in, direct them to our Teen section. Our bookstore has a wide variety of books aimed at the demo. We cool?”

This came about because a young girl’s mother raged through our doors with a ripped copy of Bukowski’s Women. The manager gave her a full refund and apologized for my behavior. He did not ask for her to apologize for essentially destroying something she didn’t pay for, though.

“I’m going to give you a list of books to read,” he said. “Study them. Sell them to our youth.”

I hated talking to the manager. He was an arrogant twenty-four-year-old round man with a balding head. His ass always left a stench, too. Every seat in the bookstore was stained by the cultures that seeped out the edge of his pants. They fought for air and made themselves at home wherever he sat. When he got up to dig through some paperwork, I wished he were yelling up at me instead. The stench jumped from the seat and gained momentum despite the lack of air in the back room. The worst part was I think he knew. It was a secret punishment.

I brought the list to my girlfriend’s house later that night. She was asleep by the time I got there. I thought she’d be amused by it because our hates matched up, but we were going to have to laugh at it another day.

She was a surgical resident who worked fifteen hour shifts in a hospital that kept hundreds of people from dying every second of every minute of every hour – at least that’s the impression I got from the stories she told me. I didn’t fault her for being tired, and I thought she enjoyed waking up to seeing me passed out next to her in the morning. No words had to be exchanged.

As a goof, I went to her office and stared at the list the manager gave me. Each book was the same. A twenty-year-old misunderstood bad boy with six-pack abs – because sometimes a parentless, hug-less, malnourished childhood created an athletic physique if someone had good genetics — got everything together because a teenage girl between sixteen and nineteen walked into his life. On top of this, the guy and girl were both hot and had beards in the places beards should be. The man, who was of course without money and without a structured meal plan, was sculpted like Dwayne “the Rock” Johnson. At no point did the book mention he stepped into a gym.

To me, though, the most ludicrous thing about the Teen books was that the guy ended up learning to read in Chapter Thirty-Eight and somehow became a hotshot lawyer. Most of the people I know, myself included, were as dumb as they come. Even though we became learned by our personal Chapter Three, we’ve scratched, clawed and fought our way down to the painful basicness of the middle. There was no goddamn way I was reading any of this stuff, so I came up with an idea.

The next morning I walked into work, gave the manager a high-five, and moved the Bukowski books to Teen Non-Fiction. Our manager’s plan was to get me familiar with books on the Teen shelves so I could sell them, and there was nothing I was more familiar with than the Henry Chinaski collection. I sold these younguns, sometimes newly college aged, Post Office, Women, Women again, Ham on Rye, a third copy of Women, and Bukowski’s poetry collection called Slouching Toward Nirvana. The teenagers all left with smiles on their faces without knowing the raunch behind this drunken man and his sordid love tales. The only six-packs in them were alcoholism inducing. I was sure some of them would find this life familiar one day.

When my manager saw what he, in his rooted-for-corporate-speak brain, called “foot traffic” in the Teen section, he congratulated me. He actually thought I did my homework.

“Don’t think I didn’t notice all those smiles at the register.” My manager made a “cha-ching” noise.

Then he noticed Notes Of A Dirty Old Man. It was a compilation of Bukowski’s oldest works. Now he wasn’t so happy because Bilfson Bulski’s book, Girls and Their Biker Boyfriends, was next to the Bukowski trash. My manager sent me home early and said he would “deliberate” my punishment the next day.

If every Bukowski book is worth $15, I made the store $90, and I wasn’t even there my whole shift. Still, I broke his balls and that warranted going home. Thank god for that because I needed a day off anyway.

I called my girlfriend and asked if she could leave the hospital early. With nobody to operate on because there were no shootings at the shady-ass Indian reservations, she met me at the beach. Finally I showed her the list and told her about the Bukowski incident. She laughed and said book number three wasn’t so bad. It was about a boy Crip gangbanger that traded in his blue bandanas for a shield and PBA cards. Apparently his girlfriend was the daughter of the police commissioner. She was white, and hilarity ensued. Tyler Perry was going to make the movie. I thought I’d actually watch that one.

The next day I went to work, and four police cars were outside the bookstore. I asked a cop what happened, and his exact words were: “This fat kid who worked there was exposin’ himself to high school girls in the Teenage book section.”

He asked what paper I was with, and when I said I worked in the bookstore, he shooed me away. I guess I look like a rat-journalist. I left and asked my girlfriend if she wanted to go to the beach again. Sadly two people ended up with bullets to their colons, so work was going to be an hours-long shit show – both literally and figuratively.

I went alone. The store opened up later that afternoon, and I ignored their calls for two days. Nobody was going to question the ethics of booksellers after living through the manager’s damaging habits. I wondered if he asked the girls if they were “cool” when he unzipped his pants? Goddamn weirdo.

They thanked me for coming back two days later and handed me my paycheck. It read $6,787. Because of how preoccupied they were, they must not have caught on that I didn’t clock out. I racked up an ûber amount of overtime. I left with a “stomach ache” and called my girlfriend again.

“No, some people work.” She laughed.

I went there alone, smoked some weed, and re-read Women. Next to me a girl held Hollywood – the happy ending to the Henry Chinanski saga – in her hand. She was the girl whose mother had complained originally.

She got my attention and lifted her book to show me what she was reading. “How you doing, man? I hope my mom didn’t get you in trouble. I love this Bukwoski guy.”

“Eww, why are you talking to me? I thought you said you were twenty-one.”

I never said that. Two generations of female kin hated me. Not bad.

She picked up her stuff and left disgusted.

I didn’t even want to talk to her in the first place. What am I going to do talking to a teenager? I finished Women, smoked more weed, and relaxed. I had enough money to do this for a little bit. I called the store and said my shoulder still hurt so I was going to need a leave of absence.

“I thought it was your stomach,” said one of the non-sex offender managers.

“Just let us know when you can come back.”

I liked this summer already.

Joseph Randazzo is a writer from Long Island. He has been published in over a dozen news and entertainment sites but only finds solace crafting fictional stories about characters in hopeless situations. Only Dallas Cowboy fans holding on to the misleading skills of Tony Romo know the type of pain his characters endure.