by Tessa A. Adams

I look up from my magazine and notice the news anchor. She wears perkiness like a pair of earrings, while she delivers news of a fire that can’t reach her house. It is clear that the event doesn’t touch her personally. I imagine that kind of visual paradox is hard to pull off every day.

“Put something on. This is depressing,” my husband says. Boredom sedates his voice. 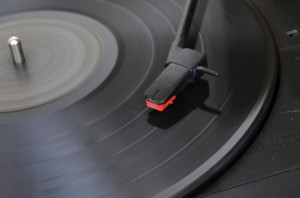 I get up, grateful that he wants music instead of television and skip over to the shelves. I finger through my collection, find the perfect one, and remove it from the others like a trophy.

The news anchor is reporting something menacing. Her voice is tinny. “The youngest suspect is still at large.”

I turn to meet the screen squarely as she reports that the murderer was twelve years old. His name is James. He joined two teenagers to kill someone three times his age. She knows this murder is different from the others, and she delivers this news as though she’s carrying a sand bag up the stairs. Her eyes don’t sparkle; she doesn’t sympathetically smile. She’s tired.

I turn back to my task of making my way to the player and remove the disk from the sleeve. Careful not to compromise the black circle before me and the magic it holds, I take the edges in my hands and flip it back and forth, inspecting its condition. There are dust spots visible, and I gently blow them away. It’s clear of debris, and I find the side I like.

Like a magnet, the TV pulls my gaze back. The suspects’ faces replace the news anchor’s image. The baby fat still clings to James’s rosy cheeks. They already have his mug shot from a previous crime, but he got to year twelve before he was a murderer. In the picture they found of Michael, the fifteen-year-old smiles with all of his teeth. It has to be a school picture. He is safe in this picture. He is loved here, but school is out in the summer. There is no picture for Marcus. He hasn’t caused any problems yet. This is his debut.

I put the vinyl on the turn table, making sure it’s cued up and ready to project sound. I rub the needle a little, ensuring it’s still sensitive to touch. The noise of a simple fingertip on the needle is deafening and startles him a bit. I turn to apologize and decide he knows it was a mistake. I enjoy the fact that if the needle is placed just right, the sound will be smooth and there will be twenty minutes of harmony. Even twenty minutes is enough. The pause will be brief, and I will have to get up to tend to the album. It’s predictable. I bring the lever down and let the music take over the room. It sucks the extra air out, making the room smaller. Extinguishing the background noise. Suffocating a hard reality.

I take my place back on the couch and grab the remote from him. Before I can turn the television’s power off, my eyes sting as I gaze through the screen at those brittle twelve-year-old eyes, and I try to let his pain wash over me. I attempt to understand his mom’s sadness. That guilt that consumes mothers on a good day is biting, and I know this is not a good day for her. I close my eyes and picture him giggling like my own kids giggle, and the joy that should have kept him from this. His actions have replaced his age. He’s being tried as an adult. Someone has taught him wrong from right. I know that to be true in my version of him, but right and wrong have different definitions where he lives. And then I try to remember the man he shot. The victim is absent from the screen. I conjure a picture of him, but his image fades to a dull silhouette. I have no choice in this ritual, because if I remove my gaze, I’m part of the revolution. Just another turn of the table. But the weight of another’s reality does nothing because my house is warm with the blanket of privilege. So I push power. I snuggle up next to my husband and close my eyes, letting the music in. And I wait for my eyes to heal and my heart to cleanse, because this sadness helps no one.

The record crackles. The distortion is perfect. It’s a barrier between me and the musician, and it keeps us at a safe distance from each other. I enjoy that I can count on this. I’ve always loved predictable change. The ending of a season. The ending of a year. The beginning of a new one. I remember skipping to choose my record, and now I cannot recollect how my carriage seemed so light. After all, it feels as though it was a lifetime ago. I breathe in through my nose and fold deeper into him. He responds with a profound sigh, and I know he feels it too.

“Do you ever think about this: What if life never turned in on itself? What if one day we realize we need each other?” I ask.

He replies, “I think we realize that. I think that’s what scares everyone.”

Tessa A. Adams is a graduate from the University of Nebraska-Lincoln. She is a language arts and creative writing teacher in Omaha, Nebraska. She has three children and when she is not mothering or teaching, she is writing. Her work can be found in Fine Lines Literary Journal and xoJane Magazine.