It Happened in Study Hall

I teach in an institution with a perpetual identity crisis—public school. Should we stuff students with facts or nurture their intrinsic genius? Are we causing the fall of Western Civilization or merely contributing? Should we be another brick in the wall or a wrecking ball? Raise test scores? Raze tests? Those questions are not mine, but they drive a lot of grown-up behavior in “the ed biz.” Many days, my central question is “Are you kidding me?” Life is high stakes; tests are not. I hope telling the truth doesn’t get me fired, because I like being here with students. We read a little and think about what texts are and what they do. We study. We talk. We listen. We ask questions. We write. I’m a high school English teacher.

High school students don’t shoot, stab, or fuck each other nearly as often as the tabloids would like you to think. Mostly they study, play, and try to figure out how to live in peace with other people. I admire them. 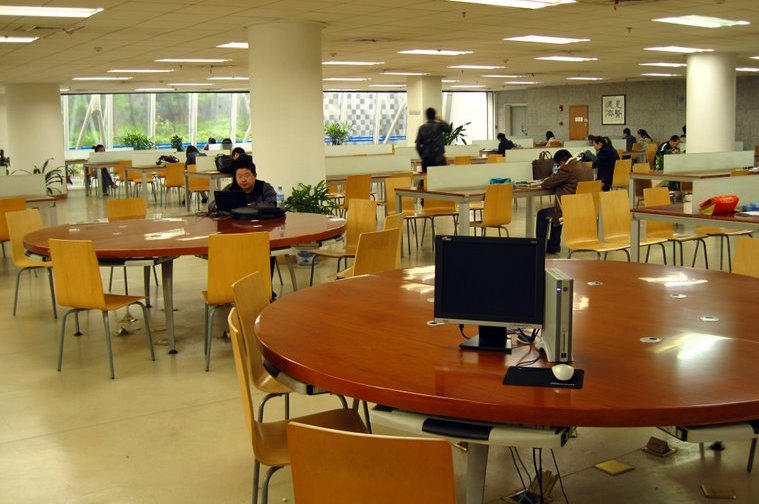 This story unfolded on a quiet day while I was supervising a study hall; students sat at round tables, reading, taking notes, and messing around on computers and phones while I graded papers. The fluorescent lights hummed, we opened and closed books, students whispered. I looked up as an anxious, smiling girl from one of my senior English classes walked into the room. A strong student, a cheerleader and a pommer—two distinct sports—part of the arcana of high school athletics. Even in civilian clothes J. looked cheerleader-ish. Shiny brown hair, thin, muscular arms, dainty, lithe, certain.

“Ms. Jaffe? Do you have time? To look at some college essays? Thank you so much.” She said this in one breath and sat down by the computer where I was working. I hadn’t had time to reply yet when she rephrased the question, “Are you busy?”

I looked at her blankly. In study hall, English teachers grade papers. Everyone knows that.

She saw my pile of ungraded essays and said, “Oh, we can do it another day…” before I’d had a chance to form a sentence.

I smiled. “I’d like to see your college essays.” It’s true. I’d rather read college application essays than grade papers. Sometimes I’d rather read the backs of cereal boxes than grade papers, but there’s definitely an ego boost in helping conscientious students revise college essays. They listen to my suggestions, and when they get into college, some of them thank me. These moments of genuine collaboration help English teachers balance those other moments when we’re reflecting on a talented student’s drug overdose, or the diagnosis of “ego disintegration” for the former class poet, or all the things we didn’t know when we were starting out that would have helped that first decade of students.

J. smiled her winning pommer smile and bobbed her head so that her shiny hair jumped around. “I thought my essays were okay until we were in those groups reading each other’s essays, and everybody else’s seemed so cre-a-tive. Do I have to be cre-a-tive Ms. Jaffe? I’m just not.”

She sounded slightly disappointed with herself, having decided that her sentences were inferior to those of her classmates.

School teaches kids to do that: compare yourself to others and you’ll find the measure of your worthlessness. Win and loss records, standardized test scores—the value of the students and teachers of an entire school is published as a “school report card.” My anger about the test-driven corporate education business “exceeds standards.” It’s only October, so I don’t know yet why J. thinks she’s not creative. Her vitality in class indicates the opposite. We all possess creativity, whether it’s suppressed, active, or latent. It’s a natural quality of human life, without which we wouldn’t be able to buy decent jeans or get a haircut. When I asked students to read each others’ college essays, their observations were supposed to be about “what each essay does well.” For kids trained to judge on a number scale, that has to mean some other essay did the same thing poorly.

“You need to use your own voice in a college essay. That’s the point. Let the reader hear you.”

J. opened her backpack, organized like a briefcase inside—an accordion fold separating neat colored folders. Sometimes I wonder what I could have accomplished in high school if I’d been capable of organizing my life. J. pulled out a folder of revised college application essays and thumbed to the first one she wanted to discuss.

I asked about the prompt.

“I need to write 300-500 words about a person who influenced me. After our group discussion the other day, I tried to make my narrative a little more cre-a-tive. I just don’t know if it works…or if my point is strong enough.”

I asked her to read the essay aloud to me, and she did. Gusts of wind were blowing leaves around, in the autumn of 1927. Creative, but not a response to the prompt. The story about her grandfather and great-grandfather was an iconic family parable, but not an essay, yet. “When did your grandfather first tell you this story, J.?”

J.’s face squeezed tight in an effort to hold back sudden tears. She sucked in her lips and held them inside her mouth until she spoke. “I don’t know why I’m crying, Ms. Jaffe. I don’t know why.” Tears washed a path through eyeliner and mascara, and she tried to wipe them away with the backs of her hands, and push up on her lower eyelids to resecure the tiny dams where they had broken through. “I’m sorry, Ms. Jaffe. I’m so sorry. I didn’t mean to cry.”

“It’s good to cry. It’s messy, and it shows me what you need to do. You need to make your essay messier. You have to put your grandfather in there so we can feel what you’re feeling. When did your grandpa die, J.?”

The study hall was still there, quietly carrying on, but everything was different for me and J. now, because together we felt the relationship between what matters in life and what matters in words. Yeah. True stuff. This is what I’m good at. I ask questions.

“You still miss him.”

She nodded silently, tears coming hard for a while.

“That’s fantastic. He must have been a good grandfather. This will be a powerful tribute to him, but you have to put him into the essay.”

J. explained how she stays at her grandparents’ home on Fridays, and how her life was and is intertwined with theirs. She flipped through the papers in her college essay folder and pulled one out, “Here. This is my first draft. I wrote more about my grandparents’ house there.”

At first I was afraid that I’d see an essay better than the intellectual cre-a-tive one that had resulted from peer readings, but no. There were some good setting details and more about the grandfather, but the cre-a-tive essay had some strong narrative details, too. The problem was that after the writers’ group, J. had crafted an essay empty of her attachment to her grandfather.

Another college essay prompt asked J. to show something important about herself she hadn’t brought up in some other part of the application. She’d written on cheerleading and being a pommer in other essays, so this one would be about travel—going to Greece. After a breezy introduction, she had a haunting sentence about a three-week period when she and her father and siblings had camped in a trailer at a Greek Orthodox monastery with fixed, rigid meal times and no snacking in between. She said something about how difficult it was at first, but then she learned to enjoy what they had. The whole essay was about twelve sentences long, with almost no images. Trailer. No snacks. Greece. Monastery. It wasn’t about travel.

“So that was pretty hard for a ten-year-old kid, but meaningful, too?”

J.’s tears came back, and she apologized for them again. The monastery visit was around the time that her parents separated. Her dad was very religious and, since the divorce, even more so. Very involved in the church. The monastery visit was probably about getting the children ready for the divorce? Yes. Her parents had been careful. They wanted things to work out well for the children. The three weeks at the monastery had been amazing. Real. About your soul? Yes. About that part of life that is more interesting than food? Yes.

J. cried a little more and talked about her parents, siblings, and history. She pointed to her tears and exclaimed, “This is why I can’t be a psychiatrist! I’m too emotional.”

“No, J., you can, if that’s what you want. Your feelings and memories are real.” I said something like that and other teachery things. She needed to hear all my affirmations because J. is a young woman who can do anything she sets her mind to. We teachers secretly believe in those posters with the shooting stars, even while we’re making fun of them. J. has self-discipline, intelligence, compassion, desire, a high tolerance for the kind of failure and frustration that is necessary for mastering knowledge and mastering the self. She’ll be an excellent shrink.

“It’s about your ten-year-old self finding your soul, and learning that not having snacks is okay—that your life is bigger than your body.”

“Yes.” She wrote a few things down.

J. worried out loud that I was going to tell her to write about her parents’ divorce.

No. I said that the writer herself has to see the context of the story. In this case, she needed to talk about the divorce in order to write an essay about the monastery. I explained to J. that writing is weird like that.

She picked up the three typed pages we’d been discussing, the first and second drafts of the grandfather story, the “travel” essay, all a little damp now, and covered with questions and comments to herself. She tucked them away in the drafts folder and pulled out a third essay, a descriptive narrative about her summer scholarship trip to a medical leadership program in Boston. The prompt was to write about an event that had influenced her choice of a major. Here J.’s conscious control over the material was strong, and she navigated the story without being thrown off course by subconscious currents. Dry-eyed and analytical, she read aloud, and commented on her own rhetorical choices as she went.

As I listened to J.’s objective commentary on her work, tears welled in my eyes. I thanked J., and explained that her work moves me. I couldn’t identify the exact source of my emotions nearly as well as J., but my response was probably empathy, mostly. This powerful young woman said yes to her history, her suffering, her self, and the end of her childhood. I heard her say yes to her future. Right there in Study Hall, J. crossed over. I watched her go.

Within 24 hours of being notified of the pending publication of this piece, jjnotier, AKA “Ms. Jaffe,” faces a disciplinary hearing at her school, for allowing some students returning early from a field trip to eat lunch during the “wrong” period. Fortunately, she’s been a halfway decent teacher for 29 years and 5 months, she’s pretty sure she did the right thing, and she’s looking for new material. Unfortunately, she’s beginning to see Kafka’s “In the Penal Colony” as realistic fiction.