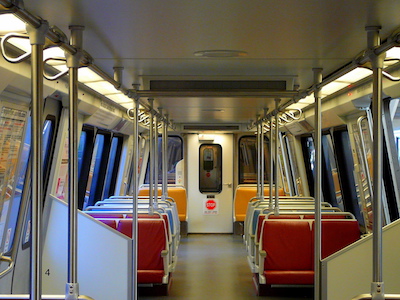 Sometimes I wish I was in bumper-to-bumper
traffic with a pigeon stuck halfway up my grille
on a dizzy highway. Earlier today I watched a homeless
man wet his pants and everyone ran to the other side
of the train. I stood still and slopped my shoes in it,
looked to see if there was anyone worth
falling in love with.

But mediocrity plays footsie with subway poles
and I can’t seem to think very straight. Or sideways.
Or even about my mother who’s probably playing
with suicide or drinking tequila or putting Nair
on her genitals while my sister washes her underwear
in the sink.

On my walk home I gave my imagination
an ultimatum: it’s marriage or nothing.
And I almost climaxed, but the car missed and the day
went on and the light turned green. And when I got
home I got up to three before feeling pathetic.
I closed the blinds, heard my neighbor
on the phone with a brain doctor, something about
rectal surgery or raccoon dogs and I lit
a cigarette and took a Valium and
dreamt about asking her if her lungs were okay.

ON YOUR WALKS YOU FIND DONUT SHOPS SERVING CHINESE TAKEOUT

A man takes you home from a bar
and you lock yourself in his bathroom
sear your tongue on his toilet
and bunny hug the detergent in his hand towel.

In the morning you have an appointment with gynecology
so you leave and it’s midday and you want to shower,
but your neighbor’s at it again, banging
his fists on the floorboards, frisking
for truth somewhere between pills and wood paneling.

Right now you’re slicing blueberries in the kitchen,
jigsawing eyes into the breadboard and asking baby
cockroaches to act as pupils for just one second,
just long enough for you to sink the blue and smack
your head against the tile.

One Advil isn’t enough so you go out for a walk
and on your walk you find a donut shop serving
Chinese take out. And this is when it becomes difficult,
playing Tom and Jerry with your hands, pretending
one of them is his while waiting in line
for your chow mein and a sprinkled donut.

It’s another night at the bar
and you fishing for lipstick in final drags of deserted
cigarettes and brush your hair with baby powder,
because someone is bound to buy you a drink, take you home,
fall in love with you. And that’s what
we do in foreign countries:
forget about the costly tortillas
wasted on breakfast with strangers.

And you wonder what the moon has to say
about all this. But there’s the sun.
And it’s tomorrow. And you’ve been here for what,
months now? And it’s the same old story.

So you grope the armrest, tackle your shoes off
play King’s cup with the mirror and reach for the sky
when you pull a seven.

A METAPHOR FOR BREAD

I was a beam of lumber when I met you
cumbersome, but standing
and tonight I feel your arms wrapped around my
useless limbs, and over there,
across the room, the table we assembled
sits lonely, waits for you to pick
the white of its leg, spill coffee
on its warped skin.

Last week I lost a tooth to root canal–
a reason to call you–dressed up, liquored up,
a sitting duck, my grandma somewhere
on a couch wishing my five-year-old
voice would turn her into a fairy again.

But tonight, you can come over
and we don’t have to touch. We can just
sit across from one another on the table
like we used to before it axed us into strangers,
and we can laugh about how cold it got this summer,
how we take the weather too personally, how pitiable
it is the way we turned our relationship into a metaphor
for bread.

Chelsea Kirk reads, writes, and over-caffeinates in Los Angeles, California, where she studies Creative Writing at the University of Southern California.