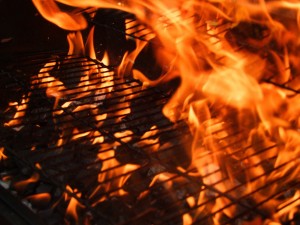 BAR-B-QUE AND THE COVETING ITCH

He had pulled off to the side of the two
aaaaaaalane highway and stopped where Kiwanians
cook up their Sunday barbequed chicken,
aaaaaaawas sitting there with both elbows propped up
on a picnic table with a leg in
aaaaaaahis hands, which sounds innocent except the
chicken was dead, and the sauce back in the
aaaaaaacooking shed had been laced with red dye back
at the factory to make it look good.
aaaaaaaCars rolled past, leaving the beach, onward and
upward to their own artificial foods,
aaaaaaafarm animals cut to pieces in the
freezer. This is just an introduction
aaaaaaato something longer and greater than we
have time for. To say that I look at the
aaaaaaasky each dawn to see it does not match the
weather report, that the trails drifting down
aaaaaaaon us keep us all wet with desire, the
coveting itch sending us in our cars
aaaaaaato the box stores, no matter the traffic.
The cat just stares at his open can of
aaaaaaafood, remembering in his DNA
that once we tossed him mackerel, the seas
aaaaaaaso plentiful the odds were always in
his favor. The hardwood burns in the grill
aaaaaaapits, supply and demand sending home the
leftovers everyone’s tired of, this fund
aaaaaaaraising on the side of the road in the
dust next to a forest cleared for condos.

The 9:30 was leaving, so we rushed
aaaaaaatoward the station. First the river, though, and
a freight train blocking us at the crossroads,
aaaaaaagiving us plenty of time to dream of
what we were missing, watching the blinking
aaaaaaalights and hearing the deafening click click
click of the car wheels on the rails, neon
aaaaaaagraffiti on the sides of the boxcars
the last hopeful expression of the not
aaaaaaafranchised. After the groan of steel was the
kind of silence brought on by loud noises
aaaaaaaand a depot that had been turned into a
craft store, so we waited in the rain, no
aaaaaaaroof overhead, our umbrellas back home
beside the door. Having nothing to say
aaaaaaais like knowing a tunnel will end but
without needing to point it out, parting
aaaaaaaof tracks in the distance as they curve to
seek their next step along a line too old
aaaaaaato be fashionable and offering
only an uneasy nostalgia, as if
aaaaaaawhen you step up into a car, you’ll ride
into the past and never return, the
aaaaaaahills fading to black and white, the world soon
depopulated by the excesses
aaaaaaawe know now, the simple place that never
was, complicated by memory and
aaaaaaathe impossibility of return.

You started limping after fifty. Once
aaaaaaayou used that rolling gait, you were done for.
When you needed to write detailed notes to
aaaaaaaremind yourself what to think, it was too
late. When they came for you, we didn’t see
aaaaaaaa single wing. One of them was new, did
not understand how the addresses worked,
aaaaaaaasked an old lady on the stoop for your
427A, where you waited,
aaaaaaayour daughter watching for the ambulance
from the front window four floors up. I still get
aaaaaaastuck on that block at mid-day, no trees, the
ground a concrete composite, once pebbles
aaaaaaain a riverbed. But no matter, I
tell I myself. People used to walk across
aaaaaaathe Ohio. Now we cut stone, haul it
somewhere, grind it down, put it in bags to
aaaaaaabe shipped anyplace, mixed with water, turned
into a new rock that sucks energy
aaaaaaafrom a battery or draws living smells
off a stained carpet. I was born too soon,
aaaaaaayou said, having been awakened too late.

Nearly 300 hundred of Sandra Kolankiewicz’s poems and stories have appeared widely over the past 35 years, most recently in Per Contra, Prairie Schooner, New World Writing, Blaze Vox, Crannog, Prick of the Spindle and Blue Stocking. Turning Inside Out is available from Black Lawrence Press. Finishing Line Press published The Way You Will Go in fall of 2015. When I Fell, a novel with 76 color illustrations by Kathy Skerrit, is available from Web-e-Books. She teaches Developmental English in West Virginia and lives with her family in Marietta, Ohio.