When I dare to sit on a public toilet, where does my mother come from? Some warped synapse in my mind, a sniper firing from one cell to another?

You must paper the seat. Arrange the paper, double-ply, over a pretend softball diamond, home to first and third to home the most essential safeguards. Perch on the seat’s edge and avoid the outfield altogether. If any plastic should touch your bottom, you’ll get “dirty,” “unsanitary,” “unclean,” then you’ll be a loose woman.

Loose women were hard women, teeth yellow from nicotine, eyes brimming with unrequited everything like the sinners in my artwork gazing up at saintly nuns, all of whom remained as serenely detached as light bulbs.

Where in Western art are images of female, adult, lay sinners praying to female saints? Or to Mother Mary? Even Magdalene’s makeover—body cleanse and career change—doesn’t get her prayed to in art. There’s some go-getting in St. Catherine Exorcising the Demon from a Woman—but for Catherine, it’s no real money shot. You want your female saints to flex big guns, but all you get is them alone (and meek), loafing with other saints (and meek), or being martyred to keep their virginity (still meek, while dying heinous deaths).

So Marla, the only atheist I knew, burst into my first apartment: I caught the worst case of herpes my doctor’s ever seen, the mess on her “holy of holies” merely inconvenient. And I got it from a one-night stand! Disease, one-night stand, no shame? How impressive and unique to atheists, I thought. Marla, bitching by my kitchenette: her big eyes and blonde curls looked like a Valentine cherub bred with Bianca Jagger.

When Marla left, the toilet loomed large. I guessed she hadn’t papered, and my mind recited a litany of cleaning products:

Where did my mother come from? She aimed, fired: Buy a new seat. And nicer friends. I tried an SOS-prayer to the heavenly call center staffed with angels and saints. Let this seat come clean. Let me one day have hot bionic monkey sex and still remain a lady.

My mother’s voice found the towel Marla had used on her hands. It resembled the drapery in Gentileschi’s Judith Beheading Holofernes. Curiously similar, only without the beheading, a fate I thought fit for Marla’s one-night stand. In art class, I never supposed that mousy Sister Eleanor, who taught only female artists—plus O’Keeffe with no mention of vaginas—might be a subversive. After all, from the lunchroom, you could see her hang the nuns’ panties on the clothesline, each pair billowing like a teensy spinnaker sail. And not one bra among them.

If I paint a wild horse, you might not see the horse…but surely you will see the wildness! – Pablo Picasso

Rear and crash, rear and crash—her fists slam down on the hood of his Mustang. You promised me, you promised, she sobs, pounding the ’65 classic, light blue.

She howls, you lying cheater, his face stunned as if tasered, blush zesty for bystanders. She growls and heaves a rusty bike on the white ragtop, ripping it.

Clearly on behalf of the Mustang, a groan from a male onlooker: That restoration’ll cost big bucks. No one intervenes.

The young man bear-hugs her and they spin and she bites him and tries to break free. Who knows why he lets her go, springs in his car, and drives off, tires skid-marking pavement?

Someone says piss and vinegar. Someone else says, That car’s fucked. And I think of material costs for restoration: wrenches, screws, glues, pliers, polish, paint. I’ve spent years reinventing, and the best I could make of me is an abstract Picasso:

feet where eyes should be, sex where mind should be, all elbows and knees, deformed, disfigured, warped. Where I’d have liked to be his Woman in White, I became the model in Ne Se Tordant les Chevaux:

triangular based pyramids for legs, spherical rear and breasts, cuboid neck, axis waist, and an oval-shaped face tipped skyward, my hands fixing my hair. And oh my body! Balanced strong and wild on those legs, intact,

peaceful, having stampeded the blue pigment from my heart, pain draining as slow as paint strained through paper, through a sieve, like water wrung gently from my long, dark hair. 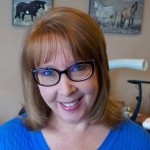 Lindsey Royce earned her Ph.D. from the University of Houston’s poetry program and M.A. from New York University’s poetry program. Her poems have appeared in many journals including New York Quarterly, Poet Lore, and Cutthroat. Her first collection of poems, Bare Hands, is forthcoming from WordTech Communications in September. She lives in Steamboat Springs, CO and is a professor of English at Colorado Mountain College.