We’d stocked up on everything: tents, grillables, lighters, a classmate who played the guitar, everything. Our sole miscalculation could have spelled catastrophe.

So, I volunteered for a booze-foraging mission—aiming to kill two more birds: play the alpha male for my date and see a man about a mule. Everyone chipped in a few bucks and misquotes on how to get abducted by the aliens, and off I hoofed.

Laughter and embers crackled on, echoing the pitch wilderness underfoot, until I serpentined into a lakeside meadow where a cow reflected and absorbed the moon. Camo patterns on its hide had tanned noir, the rest of it bleached blank. Light had mingled with vapors. Myself now a party to this mixer, I could practically see the smell, or taste the beams. I shone my torch—the beast rotated around its axis, displaying its continents and chasing me off with its tail.

According to my hunter-gatherer instincts, the presence of a domestic animal indicated the proximity of humans. It had revolved back, probably to keep an eye on a potential predator. I drained my lizard on the sky-blue lupines, zipped up, wiped my hand with a lock of grass and lit a cigarette. My schlep resumed, footprints stitching the field.

That’s when I heard a woman’s voice. “Aw, that smells so good.” 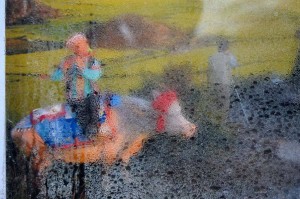 My head whipped in that direction: no one but the cow—already within a stone’s throw.

“I’d strike a deal with the devil for some nicotine right about now,” said the voice.

Not a damned soul—only the cow, masticating, its drawling steps shushing at me through the grass. Keep still, avoid eye contact, I remembered. “I hate to be a pest, but why don’t you do me a favor and have a seat there, tiger,” said the voice.

“Really?” laughed my interlocutress as the cow halted a few feet away, eclipsing my view. I ducked to peer from under it into the night, black as half its hair.

“Absurd? Paradoxical? Cuckoo? Yet here we are, having a conversation. Who said life had to make sense?” she ruminated. “Now we’ve got that out of the way, do you promise not to try to tip me over, hunt me or—something I find utterly inappropriate—milk me?”

“You should see some of these dumb-asses. Just last week, this cowboy tried to lasso me and do rodeo. What a nightmare. Well, I sure showed that slugger some corrida.”

“Close enough. Now what’s a cow got to do to get a cancer stick around here? I’m dying for one.” She spat out two packs’ worth of brain-shaped gum.

“Sorry.” I patted myself down, then extended the open box of Camels.

She stared. “What chivalry.”

My hand still outstretched, holding the cigarettes, felt more awkward than the idea of offering them to a cow, with whom I was presently carrying on a dialogue.

“Sorry.” I shook out a smoke, fed it between her lips and lit it.

Now, before me, stood a cow with a cigarette sticking out of her mouth and smoke billowing out her nostrils. “So, what’s your name, stud?” She ground her molars, puffing away.

“I’m Grace,” said the creature. “Pleased to meet you.”

“Likewise, but what… what are you doing here?”

“What kind of an asinine question is that? Can’t you see—I’m digesting, playing volleyball and doing my Kegels, all at the same time?”

“A talking cow? It’s pretty basic: I’m a were-cow,” Grace asserted. “Neither fish nor fowl. Born and bred to grab the bull by the horns.”

“A were-cow,” she chirped. “Like, you know how there are werewolves? Foxes in China? Well, I’m a were-cow. What’s with the deer-in-the-headlights look, my pet? I’m a vegetarian.”

“Never heard of a were-cow,” I confessed.

“How evolved. What is this, canine privilege? You, people, have been mooching the lion’s share of your sustenance from us scapegoats since before the Neolithic revolution, but when you meet a spunky were-cow in her natural habitat—oh no, that just can’t be. That really bugs me.” Grace-the-cow took a drag and blew smoke in my face. “Yeah, let’s have Bambi and Dumbo hog all the empathy. Screw the cows. Deer are just smaller, dumber and more cowardly, by the way. The same with chickens and eagles.”

What a character, and what a can of worms I’d opened.

I said, “Hey, you’re barking up the wrong tree. I have a beef with my species, too.”

“Real birds of a feather, we are.” Grace-the-cow coughed a chuckle cloud. “Bear in mind—don’t lock horns with were-squirrels, -crows or -unicorns. Tick them off—your goose is cooked.” Her expiring roach croaked underhoof.

“In case you want to beef up your security… ” I said. “I’d never let anyone bully you.”

“Oh, I can do this till the cows come home,” I smirked. “Anyway, here’s another question. At the stroke of midnight, you transubstantiate?”

“Quite the whisperer, aren’t you,” she said. “No, that’s a croc of fairy-tale bullshit. Cinderella becomes an ugly bitch at the stroke of midnight. Please. This is reality, son. I’m a cow who turns into a chick, and it’s not at twelve. It actually happens exactly eleven hours, fifty-two minutes and twenty-eight seconds after I wake up.” Grace cocked her head to glance at the moon. “In fact, it might be good if I bunny-hop into those bushes.”

In a shake of a tail, the cow melted away, leaving in her place a big-eyed twenty-something brunette—like in a movie. Had she strategically forgotten to check the time?

“Oops,” said the girl, “too late.” The moonlight shaded night and day around her crescent breasts and buttocks.

I distracted myself by fishing a cigarette out of the pack. I lit the filter, broke it off and put the match to the stub.

“I call this one The Worshipped Bovinity.” She struck a yoga pose.

I burned my fingers and waved the blaze out.

Her calligraphic curves bold-faced as she arched and cracked her spine.

I proffered the smokes. Grace grabbed one—black nail polish. “I’m such a leech.” She stuck it behind her ear. “Tomorrow—cold turkey.”

I felt aflame like a half-fellated ferret in a forest fire—verbatim: the cherry from my cigarette had fallen on my jeans. I rushed to my own rescue, burning myself more, swearing and blushing like a cheek after a spanking.

Grace giggled—all the way to the broccoli-like tree she hid behind. When she rustled back out, she had on a white tank-top and a pair of black sports pants.

She alighted beside me on my roost. “I’m going to this underground party. You game? They’ve got a sweet line-up tonight. I’m on the guest list.” She tied her hair in a ponytail.

I said, “Well, I’m actually here with someone.” It was strange to watch her casually wipe her feet and put on her socks after her metamorphosis. Questions swarmed in my head—like where she was from, what happened when she had her period, what she looked for in a man. “What fancy colors you have,” I said.

“Whoa, hold your horses. You don’t pussyfoot around, do you?” Her eyes batted. “White is what you see under black light—it brings out light colors. Black is the negative space. So when I’m dancing, what you see are my eyes, my teeth, my shirt and the stripes on my pants and shoes. I also have white gloves.” She stood up and performed a few pas. “How do I look?”

Grace bent down and pecked me on the cheek. “You dog.” Her hair grazed my skin. “How do I smell?”

“I’m picking up mowed grass with a hint of… Christmas tree?”

Call me a hopeless romantic, but ever since then, I see Grace in every Holstein-Friesian—and each time, I want her to have woken up eleven hours, fifty-two minutes and twenty-eight seconds earlier.

Max Orkis lives in the San Francisco Bay Area. He works as a writer/editor in a high-tech company. His English prose has appeared in Weber — The Contemporary West, The Milo Review, Gravel, Empty Sink, Words with JAM, and The Thought Notebook. His Russian poetry has been published in the 2011 Grigoryev Competition Anthology, Topos, Polutona, Prolog, Satirikon-bis, and elsewhere.