At a swinging cocktail party (where else?),
the boyfriend of the host took the banter
to an unexpected place by quipping,
“What kind of Nazi could anyone love?”
This was my considered if drunken reply…

“My fantasy Nazi is as bald as a doorknob,
sports a moustache like Freddy Mercury’s
and has swastikas laid out on his arm
as neatly as kitchen tiles. Stenciled
on his back is a prison tattoo declaring
‘Work will make you free!’

“He’s a homegrown hatemonger,
all sinew and snap, sneer and leer,
a libertarian with little patience
for diversity or equal opportunity,
the woman question or the gay agenda.

“As a couple, we’d outrage the neighbors:
We’d be the homo and homophobic hottie
who hump in love as much as hate.
Fruitcake and nut job, pansy and dick weed,
we’d confound the very labels we’d been assigned.

“We’d be our own double standards
engaged in politically incorrect sex acts
that recognize no religion, no faith,
no limits, no future, no common language.
All we’d share is a designated safe word…”

But before I could say what that was,
our hostess had ushered me out the door. 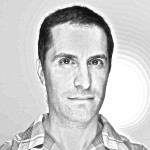 Former VP of Digital Media for AMC and SundanceTV, Drew Pisarra is now working on a stage play inspired by the life of Jayne Mansfield and a screenplay about a man whose memory is shot to Hell. You can witness his obsession with Korean movies at koreangrindhouse.blogspot.com or see his photos of public art at mistermysterio on Instagram.