Lost and without a wall you are unsure
what stays dark, what will move
once a flashlight is waved in front

and the plane in the picture begins to flicker
taking hold one hand all these years
dead, smothered under the frame

half dry wood, half morning
and though there’s no sky yet
you are flying again

wobbled by winds no one sees anymore
making room in the fleece-lined glove
that can’t tell where your fingers are.

For the last time this overpass
reaching out and the invisible horse
half spray, half these cobblestones

you hold on to though this on and on
is already aimless, falling from rooftops
as rain and on your shoulders more feathers

—all these thorns: step by step
each splash fastens on just one foot
though you dig without any dirt or shovel.

You fold this tablecloth, again, again
lifting her dress though your fingers
are hidden and turning colder so no one

touches your hand already frozen
fallen off between her tireless breasts
that still dance, offer you no other way

—you have to fold! smaller and smaller
the way each stone over and over
breaking in half to forget

by sealing this leak in the Earth
in this wobbly table and in her plate
a fork half braids, a knife

—you have to fold, make the table
disappear so you don’t remember
the soothing lace, the smothered wood

—you have to trade! and this tiny spoon
that wanted to be a flower
picked for her cheeks and flowing again

folding again, over and over
till nothing’s left in the open
not the walls, not the arms, not the breathing.

You’ve done it before, the horse
lowers its head heavier and heavier
—you know some wagon

is always getting lost, its wheels
rotted out, wobbling and pull
the same overloaded sun

—you know how it ends, the horse
falls on its side, the whip
criss crosses, not sure

desperate for the loose dirt
that flows back, taken in
as if an ancient sea

is still struggling in your hand
though you sift this still damp grass
for hooves, reminded over and over

by waves, and the evenings
now on their own without you
already know what to do. 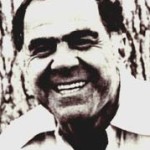 Simon Perchik is an attorney whose poems have appeared in Partisan Review, The Nation, Poetry, Osiris, The New Yorker and elsewhere. His most recent collection is Almost Rain, published by River Otter Press (2013). For more information, including free e-books and his essay titled “Magic, Illusion and Other Realities,” please visit his website at www.simonperchik.com.