THE TALK AT NIGHT

Lie with your head on a pillow
in darkness and suddenly hear
an insane honking above the roof,
below the stars. A dark discussion
ridiculous as the city, its ragged threads
at war. The geese in their old spearhead
pointed in the cold below the stars,
egging each other on to fly
all night. Quickly, mercifully,
they pass, looking down
into our dark canyon,
where a pinpoint of light,
where a single car
follows its headlights to a bar.

Blue, white speckled bowl
cold, metal wheel pressed,
dry for several lifetimes.
Come haunt a shop window
and advertise the hunger
for more life, ghetto cereal,
fishhook loneliness. Make the rich
dream the lives of the poor
are a toy. The soul: a mere top
to spin in the mind
and go fish.

We sleep to get away from it,
a mannerism of the eel.
We slither through, reject the light
and human hands that grasped
at us all day in the office, on the realer street.
This bargain includes industrial-strength dreams,
daemons of place, the supernatural,
flibbertigibbets of ghosts that press dead nerves,
and some creatures that never were,
bodies ready to accuse or seduce,
whatever its weird, soft narrative wants.
But it’s the ultimate integrity on earth,
for no one can bribe these no ones,
no soul on earth can buy or sell
these loyal employees
of the othersphere. 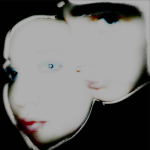 William Keckler is the author of Sanskrit of the Body (Penguin) and has translated two early works by Malraux into English. His visual art and photography was published recently (alongside that of Esther Reyes, Ivan Melnychuk and Tim Pyle) in the book Four Photographers. He curates a visual arts tumblr, The Visual Virgin.