Suanne Schafer: Orna, your biography states you are a journalist. How long have you been writing?

Orna Glick: I have been writing fiction professionally since 2009 when my Hebrew novel, Sons of God, was published in Israel. Before that, I wrote non-fiction, news and features as a journalist for CBS in New York City and the Jerusalem Post in Israel.

SS: What prompted your switch from non-fiction to fiction? 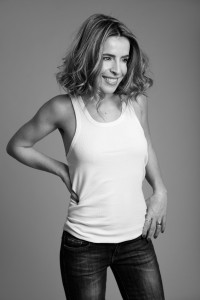 OG: Being a novelist has been my life-long dream. I always knew that once I felt I had a story I couldn’t resist telling, I would sit down and belt it out. When I wrote my first novel in Hebrew, it was more about “testing the waters,” seeing what it would be like to be published in a small arena, such as the Hebrew-speaking community. And when that turned out to work out well, I thought, “Okay, next time, the big leagues.” For me, writing in English is the Olympics for two reasons: A. English has such an abundance of words, one that a writer like myself cherishes, and B. The audience, of course, is of a much larger scale.

OG: The story “Dy(e)ing Purple” is essentially the story of my own father tragically dying of brain cancer; that being said, of course it is based on what I experienced with my father, but it is still fiction. What mostly caused this story to burn my gut was the abundance of cancer tales and the romantic side of death I felt they were portraying. It has been bothering me very much. Reading great books like The Fault in Our Stars to name one, although enjoyable on so many levels, was upsetting in how it didn’t show enough of the ugliness, decay, and absolute horror that dying of cancer entails. I felt I had to tell it differently. I had to show what it really is, if only for all those people out there who go through those tragic motions and feel like they are completely alone. With every third person in the Western World getting cancer, there has to be an account of it that makes you feel it to the bone.

SS: How did you decide to expand the short story to a novel?

OG: The short story “Dy(e)ing Purple” felt like it could be the mother of a larger scale work; the characters had more to say. When I asked [you] for [your] thoughts on this, [you] said: “Give it a shot and show me what you come up with.” So I did. And with [your] undying devotion, as the de-facto editor of the book, it is slowly but surely becoming a full-length novel.

SS: Why did you submit the story to Empty Sink Publishing?

OG: I submitted the story to ESP because I loved that they called themselves “the magazine for intellectual deviants.” I felt like Ben Young, my protagonist, is an intellectual deviant. Reading the work of others who published there made me think this magazine could be a good home for my story, as indeed it has been.

SS: How has Empty Sink helped/affected your writing?

OG: One person specifically in ESP affected my writing in a way I would be forever grateful for: Suanne Schafer. She literally not only edited the story without taking any of its youthful, naïve spirit away, without touching its beating heart; but she is also the editor of the novel by the same title. She just took this tale under her gracious and most capable wing in a way that is almost hard to describe as I am still in debt to her. First, her professional understanding of writing, the meaning of structure, the depth of analyzing characters is supreme. Second, she gets the story in a way, I, as the writer, sometimes fail to. She simply gets the characters, their spirit, and their struggles. Third, her patience and generosity is out of this world. We have only met through the magazine and we live on different sides of the planet almost, yet she has taught me more about writing than anyone I have ever met, and that includes prestigious institutes like Columbia Journalism School, Hebrew University and UCLA’s English Departments. Ms. Schafer’s dedication, compassion, and talent is the biggest professional gift I have ever been given.

SS: What do you foresee for your writing in the future?

OG: As I am still working on Dy(e)ing Purple, the novel, I believe I will be engaged in getting it published in the US or England. After that, I hope to expand my fiction writing into additional fields such as scripts. I know I will write more novels, have a few ideas running through my head. I think for the most part I will remain in the Young Adult area, I love writing about and for the young (as well as the young-minded); maybe because deep down I am still a kid.