In my father’s building, there was a daily ritual. The old ladies from the building would gather in the lobby and wait for the mailman, saying things like “I hope he doesn’t come as late as he did yesterday” or “Remember that Thursday in October when he didn’t come at all?”

When the mailman did arrive, he would sort through the envelopes and magazines, sometimes tapping them briefly against the hard metal edge of the wall-mounted mailbox, as if for a moment he couldn’t remember who lived where, before dropping them into the appropriate slot.

After the mailman left, the women would rush to their designated mailboxes and, with keys in hand, in one fluid synchronized motion, they opened their mailboxes and closed them.

Then, standing there, with their envelopes, they sighed a collective disappointed sigh. “Bills! Always bills,” one woman wailed. The others nodded in agreement, as if, instead of phone bills, they were waiting for long-lost love letters.

On the day of my mother’s funeral, when I entered the lobby on my way to the elevator, they said to me: “Your mother was a fine woman, always so well-dressed.” And “Your father loved her so.”

I remember that day, looking out from the tenth-floor kitchen window at the Con Ed smoke stacks and the brown and red tug boats behind them on the East River. My father was whispering to someone on the phone that hung on the wall just to the left of the old white enamel gas stove.

I was thinking, when one parent dies, you still have the other parent, so it’s only half a loss. Part of your life stops—but only half of it; the other half is still alive, right there in the kitchen, talking on the phone. One part of your life remains wholly perfectly intact, untouched.

And the house you grew up in, the world that your parents built and created for you, is whole, too, exactly the same as it always was. The painting of the Russian woman in the red dress in the garden of white flowers is still hanging over the couch, exactly where your father hung it forty years ago when your mother brought it home from that antique store on Second Avenue, the store that hasn’t been there in years. My mother liked to tell people when they first came to the apartment that she was related to the woman in the painting; and there’s the white ceramic elephant stool that I was never allowed to sit on, and the dark purple wall-to-wall carpeting that felt so scratchy when I lay on it, watching Neil Armstrong walk on the moon, or Joni Mitchell sing “They paved paradise . . .” on the Sonny and Cher Show.

As long as all those objects—all those things—all that stuff, is together in that tenth floor apartment, then nobody’s really dead; they’re just not home yet. Perhaps, they are on the subway, on a bus, or at the grocery store, buying milk.

My wife, Regina, and I used to go to my father’s house for dinner every month. My father was a great cook. He loved to eat and drink. One night, when he ran out of red wine, we all switched to vodka. Regina wound up throwing up in the bushes in front of the building. After that, whenever we would go to see my father, I would tease Regina, point to the ground near the bushes and say, “Look! No grass ever grows there.” Regina would get mad at me, then smile and laugh.

Twenty years after my mother’s funeral, it was my father’s turn. There were no old ladies in the lobby to greet me; they were dead, too. The building was filled with young people now, with their backpacks and baby strollers, not old enough yet to be waiting for long-lost love letters. The last thing I took down off the wall was the old black Bakelite phone. I put it in a large plastic garbage bag. Nobody wants it; we all have cell phones now. I took the painting of the Russian woman in the red dress. My brother wanted the white ceramic elephant.

Once all the pictures and mirrors were taken down, the only thing left on the walls were the nails. I had never realized how many nails there were, hidden all those years behind the pictures and mirrors, like the steel beams that hold up the building, hidden behind the plaster and concrete walls and wooden floors—never seen unless they tear the building down and you’re on the street, watching. Then, you’d see the construction workers, chipping away at the concrete, exposing the steel beams and then cutting them up into small, manageable pieces, pieces that could easily be carted away, like the large, dark section of purple wall-to-wall carpet, being rolled up and wrestled by a maintenance man into the elevator. Like a dead body. 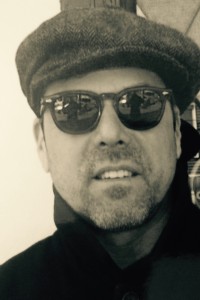