Originally from Rochester, New York, John McCaffrey attended Villanova University and received his M.A. in Creative Writing from the City College of New York. His stories, essays and reviews have appeared in numerous literary journals, magazines and newspapers. He is the author of two published books: The Book of Ash, a science fiction novel, and the short story collection Two Syllable Men. He lives in Hoboken, New Jersey. 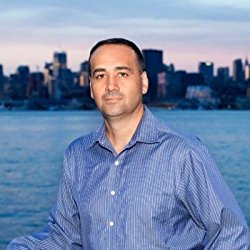 Empty Sink Publishing: How much research did you do to support the storytelling in ‘Automatically Hip’?

John McCaffrey: According to Mark Twain, attributed with the quote, “Write what you know,” this is a story I shouldn’t have written, since it’s about a person (Thelonious Monk) an event (his arrest for heroin possession in 1951), and a form of music (jazz) I knew very little about. So I did more research than I usually do for a fictional piece, leaning on Google to provide me with the information I needed to appear informed, and more to find words and phrases commonly used by jazz performers. The story was also influenced by a book I was reading about Jack Molinas, an infamous basketball player and gambling savant who, in the 1950s and 60s, parlayed both these talents to his ultimate destruction and murder. Molinas lived life much like a jazz song: on and off-the-court he moved to his own beat, and while his end was tragic, there was a manic, melancholic melody to his existence that helped inspire my writing. In fact, I slipped a Molinas cameo into the piece.

ESP: Improvisation is a crucial part of the jazz experience. What kind of planning did you do regarding the story’s structure, and where did you allow yourself the freedom to improvise?

JM: Great question. To start, I was given the idea (or commission) for the story by a friend, Harry Dreizen, a jazz maven and writer who has penned an amazing series of poems on Charlie Parker. Harry wanted to write a play about Monk and his arrest, and asked if I could flesh out a story for him on the subject to use as a foundation for a later staged piece. After careful thought, I devised a monologue structure, with four characters giving impressions on the same subject. As for improvisation, I took creative license to write out the internal thoughts of the characters in a way that matched the theme I was trying to present: that all aspects of Monk’s life, all his decisions, were based on musical principles, in this case, jazz, where a bad note, a “clunker,” (i.e. his arrest), served as a touchstone for his triumphant return.

ESP: In “Automatically Hip”, the rhythm of the prose seems very musical and jazz-like. Did you listen to music while writing it?

JM: Yes, before I put hand to keyboard, I cued my Pandora setting to create a station based on Thelonious Monk and other jazz legends.

ESP: A historical cartoon inspired “Automatically Hip.” Can you briefly explain how a visual stimulus started the process of writing about music?

JM: As I mentioned earlier, my friend, Harry Dreizen, turned me onto this story, giving me, over coffee one day, a cartoon (‘Thelonious Monk is Alive at the Five Spot’) by John Wilcock, a famed publisher of underground newspapers in the 1960’s. The cartoon provided an illustrated history of Monk’s controversial arrest and his subsequent exile from the stage for several years. Harry also proffered the title – “Automatically Hip.”

ESP: The inclusion of the graphic narrative along with your prose is a unique approach, something we haven’t seen at Empty Sink Publishing before. What inspired this approach?

JM: Insecurity; meaning, I worried that the monologues constituting the piece would not be sufficient for the reader to gain a true sense of the actual event. So I included the cartoon, which does well to detail the arrest and Monk’s subsequent exile and return. Plus, I thought the cartoon, in addition to providing historical content, had an artistic, even jazzy feel, which I felt dovetailed nicely with the prose I was trying to put forth.

ESP: The genre of jazz has many colorful and interesting artists. What in particular did you find intriguing and inspiring about Thelonious Monk?

JM: After learning more about Monk, I became intrigued with his perseverance in the face of adversity, and also the strength of his character to be patient and accept bad times and use them as a springboard to reach greater heights. Like many geniuses, I believe he saw things clearly, far in advance, using this foresight to gain maximum advantage and productivity in the present.

JM: F. Scott Fitzgerald. We would start with a train ride out to Montauk from New York City, and from there taxi over to the Montauket, a combination motel, restaurant and bar. The Montauket has a killer juke box, hearty local fare, the best sunset view on Long Island, and enough quiet and panoramic beauty (along with booze) to inspire a meaningful conversation on writing, life and everything in between. My first question to Fitzgerald: “Why Gatsby?”

JM: In Elementary school, 2nd or 3rd grade, a friend of mine in art class, Todd Rose, was unintentionally dotting a canvas with paint. The teacher told him it reminded her of Georges-Pierre Seurat and proceeded to tell us about his method (Pointillism) and Impressionism. It was the first time I ever learned (and reflected on) the idea that there were people in this world who not only created art, but devoted their life to it. It was an empowering moment.

JM: “The Sun Also Rises” by Ernest Hemingway. The sparse, clean sentences encourage me to stay within my limits when I write, and the taut story and tense action always hold my attention.

JM: Follow your interests, and then let them guide you toward (and through) writing projects.