Samuel Cole lives in Woodbury, MN, where he finds work in special event/development management. He’s a poet, flash fiction geek, and political essayist enthusiast. His work has appeared in many literary journals, and his first poetry collection, Bereft and the Same-Sex Heart, was published in October 2016 by Pski’s Porch Publishing. His second book, Bloodwork, a collection of short stories, will be published in June/July 2017. He is also an award-winning card maker and scrapbooker.

Empty Sink Publishing: In “The Weebies,” we meet Walker Weebie, who, unlike his siblings, achieved the escape velocity needed to overcome the circumstances he was born into. We then watch this oil-and-water family reunite on a camping trip, where old secrets boil to the surface in unexpected ways. What inspired this story?

Samuel Cole: Walker’s story came to me while I was cycling through a small town, and adjacent campsite, in high-north Minnesota. Towering among homogeneous campers stood a man who didn’t appear to fit in: clothes, skin tone, posture, and aura. Brightness among inextricable dullness. He didn’t belong, and I had to know (and write) why.

ESP: One of the things I loved about the story was how nature emerged as a character unto itself–even as an antagonist, when it comes to the yellow jackets. Did you always intend for nature to play such a significant role in the story, or was that a theme that emerged as the narrative developed?

SC: Walker is an outsider, in every sense of the word. Although he’s built a life of fitting it, he doesn’t. His nature is to comply with and fight against nature.

ESP: By the end of the story, I felt like I had followed Walker on a mini-Homeric odyssey. What was your primary focus as you were plotting the story: the way the story ends for Walker, or the journey that got him there?

SC: Both. I knew how the story was going to end upon writing the first word. The challenge was to follow Walker to the conclusion, and not lead him. 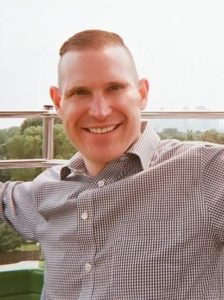 ESP: You mentioned in one of your emails that you spent a significant amount of time editing “The Weebies.” Can you share a little bit about how you approach the revision process on a piece of this size?

SC: Don’t rush. Be patient. Work hard. Play harder. Doubt everything. Cry often. Never quit. Defend with insight and compassion every decision every character makes. Then change the POV and defend it again. Without hubris.

SC: I read screenplays. I am a songwriter. I photograph more than I sleep. Life’s rhythm beyond the page is what makes the page come alive. It’s all about sensory adaptation, my friends. And I am, happily, sensed.

SC: After reading the book, Anne of Green Gables by Lucy Maud Montgomery as a young boy. Anne wanted to belong. She worried she’d never belong. She happened upon a chance to belong. She faced challenges that threatened her chance to belong. She made incremental changes to ensure belonging. She broke stereotypes and found voice as she forgave past brokenness and embraced future risk. I am Anne. We are all Anne. Every character I write has a little bit of Anne in them.

SC: I must write, or I will wither into uniformity. And wear plaid.