Spencer K. M. Brown was born in Bedfordshire, England. His stories, poems, and essays have appeared in numerous magazines and journals. He was awarded the 2016 Penelope Niven Award for Excellence in Creative Writing. He currently lives North Carolina where he is at work on a novel.

Empty Sink Publishing: In “The Sound of Trees,” we meet a narrator who has lost his child, his wife, and just about everything else except his ailing parents and their meager home. What inspired this story?

Spencer K. M. Brown: In the autumn when I wrote this story, I woke up one morning and it was freezing cold in my apartment, and I had this image in my head. The image of Ellis finding this dead bird on the porch. And that stuck with me all that day and a few days after. I wondered who Ellis was and why he took such time and care to bury the bird and why it affected him so much. A lot of my writing comes from images like that, just things that sort of get stuck in my head. When I can’t shake them, I am drawn to the typewriter and then I learn what it all means. 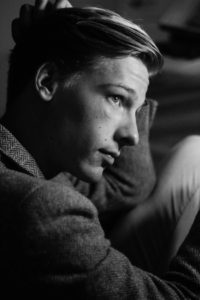 SB: The idea of home has always interested me. When you’re a kid there’s this yearning to grow up and leave home and travel the world and then at some point you realize you’re just trying to recreate that same home, only it’s gone by then. It’s lost. Ellis is like this. The home he made for himself was shattered. He was forced to return to his parents, not only because that’s all that was left, but because of the shame he felt. I think there is an interesting passive-aggression in Ellis at the same time. He’s forced to return home to care for his parents, but at the same time, he’s angry about it, he uses this almost as an excuse not to put his chips back on the table, so to speak. It’s a balance between anguish, despair and hope.

ESP: Can you shed some light on what “the sound of trees” means to Ellis?

SB: I think it’s this notion of nothingness—no din of the modern world, no distraction, no filling the void of day-to-day life. Simply allowing things to be as they are. Ellis suddenly stops, breaks free from all of the bullshit, and just hears everything around him. He hears the nothingness, and that’s enough to change someone.

ESP: Would you mind sharing a little bit about the process you use when revising your work?

SB: I write on a 1950s Royalite typewriter. The computer is all well and good for some people, but somehow it just never feels right when I type on it. A typewriter makes you work for your words, for each letter. When I begin a story or poem or novel, I just begin. Some people can move all around, write the ending first or the middle or what have you. But I start from the top each time. I write it all in one sitting if I can (novels take a little longer, though the process is the same) and then I leave it there in my writing desk for a few days. When I come back to it, I put in fresh paper and write it again from memory. Then I’ll read through it, see what stuck with me from the first draft, type it out again. That’s all the boring nuts and bolts of how I write.

SB: Cormac McCarthy. Just a few beers at a quiet bar. That’d be all right.

SB: Keep going. No matter what. Unless, of course, you don’t want to.

SB: I was raised by movies pretty much. I’ve toured in bands since I was in high school. I take my sustenance from all art forms. They play a very big role in my writing, though that would take a lot longer than this Q/A to get through all of that.

SB: I was nine-years-old and my grandfather gave me his original record of Take Five by the Dave Brubeck Quartet. I’d never heard jazz music before. I stayed up and listened to it all night long, over and over. That single record sort of aligned all the tumblers and showed me what was possible.

SB: I don’t think there is one single thing that drives me. I wake up every day and I am simply drawn to the typewriter, I just simply must do it. I think you need that fire. I guess the simple answer is, to borrow from Flannery O’Connor, I write because I am good at it. It’s what I do, my reason for living.