My First Trip to the Mental Hospital

The orange unit is the locked ward. One side is for the dangerous patients. I press a buzzer, and an official voice answers. The buzzer sounds and I open the solid wood door. I find myself on the unit, surrounded by patients.

Men—lots of them refugees—pace around the dayroom, some talking to people who aren’t there. A woman cries out, “I’m shapeshifting!” Crackheads, emaciated, dance on air. I take it all in in an instant: the fluorescent lights buzzing, the gleaming linoleum floor, the darkened bedrooms surrounding the dayroom where inert shapes doze.

The patients are center stage. I can’t even see the nurses’ station, but when I find it, no one looks up. Finally, I get their attention and am told to go with a nurse to another locked door.

This side is for the dangerous patients. They pace, agitated, eyes crackling. The staff here is on high alert, taut, grounded, ready to stop a riot. Their trained eyes pan the room like searchlights, ready for any hint of an incendiary device in human form.

There he is—my son. He is 22, the youngest one here. This was the only unit in the city with a bed open. I spot him with a female aide who is trying to play cards with him. I search for signs of terror, but he is flat, compliant, attached to reality by a thread. When our eyes meet, I think I might be the first thing he’s seen since he woke up this morning. Because he is 22, I can’t scoop him up in my arms and kiss his face. I can’t whisk him away from this place, because I put him in here.

I am at the card table in a heartbeat. “Hi honey.” I look into his eyes; they are not blazing, nor is he terrified. He is withdrawn.Good for him.

The aide stands up. I thank her so much for staying with him, and she drifts away. I touch his arm. I ask very concrete questions just to connect. He answers minimally. We are connected. I can feel his umbilical cord pulling at me inside, aching. He is tethered to me—but not to the world.

They let me take him out of the hospital for a smoke break, and I realize he could not cross the street without getting hit. Years later he will tell me, “It’s a good thing I was so out of it. I can hardly remember anything that happened in there.”

Suddenly a bed becomes available in the not-so-violent-but-extremely-crazy unit next to this one. He gets buzzed in and shown to a four-man room. He wants to take a shower but will not unless I sit on his bed and watch the bathroom door. I do this for him. One of his roommates is in his 20s and extremely manic. “I can talk my way out of being committed every time. I just tell them what they want to hear, I tell a bunch of lies…” he rambles on. My ears perk up when he says,” …the only time I get screwed up is when I forget which lies I’ve told to who!” He laughs abruptly.

The other two roommates are immigrants—Muslims who have fled here and found housing in the inner city. They are quiet and respectful. In the days to come, they will tell me, “Your son is good boy. Yes. Very good boy,” in that familiar accent. I hope they bring him some comfort, because his father is an Arab and has the same accent.

My son pokes his head out of the bathroom. I hand him some clean clothes. I have to leave; the doctor is here. I promise I’ll be back that evening during visiting hours. I introduce myself to the doctor and her assistant so they’ll know they have someone else to answer to.

When I return, he is lying on his bed, exhausted. He has put a cigarette butt between his upper lip and his nose. I kiss his head and pull up a chair. I keep my hand on his arm. He knows I’m there. Let him rest. I stay there as the sun goes down, for what seems like hours. His neck still bears bright red scratches from some shaman he found to heal him. He refuses medication; he wants to be healed spiritually.

His eyes flutter open. “Mom, if my spirit leaves my body, don’t let it go.”

When he is safely asleep, I let the tears fall, soundless. An Australian nurse makes the rounds. My head down, I hear her say, “Aww, so sorry, mum.” Her kindness threatens to crack me open. That day I build a dam to keep from flooding. I have to stay strong. I have to hold on to his spirit. 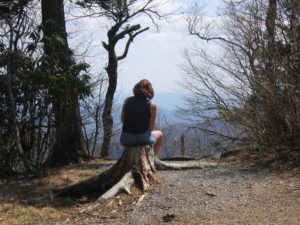 Monica Behr is a writer, teacher, and human rights advocate who fell prey to the Wanderlust at the age of eight, when she ran away from home into the woods with a box of Cheerios. She has been living in different cities and countries ever since. Monica has finally made her home in the woods in an actual house and no longer sustains herself on Cheerios. She is delighted to live amidst some of the oldest and greenest mountains on earth; as such, Monica writes for those near and dear whose stories have touched her the most, whose voices may not otherwise be heard. Living the story told in “My First Trip to the Mental Hospital” forced her to learn how to navigate the broken mental health system and taught her once again that “it takes a village.”