*Scroll to the bottom of the article for an update on the second edition of Call Me Pomeroy.

We introduced you to James Hanna’s “slouching beast,” AKA Edward Beasley, AKA Crockett, AKA Samson, AKA Pomeroy, in our first issue, where the first story to feature the character, “Call Me Pomeroy,” received our Editor’s Choice award. Since then, it’s been a wild ride for Pomeroy, as well as the man who created him. For his part, Pomeroy appeared twice more in Empty Sink Publishing: once as a willing accomplice in a ferry boat hijacking, and the next time as a dissident on the run in London. 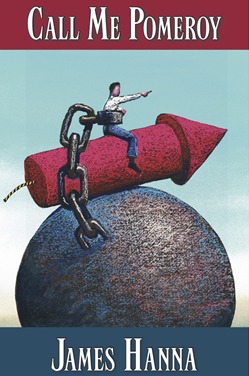 “It has it all. The blind optimism, the phallic symbol, the pending disaster.” —James Hanna on the “Call Me Pomeroy” cover art

Hanna, meanwhile, has found continued success in the less combative (but no less ridiculous) world of publishing. His first novel, The Siege, debuted to critical success, and he’s been published in notable magazines including The Red Savina Review and Zymbol. Most recently, he has released a collection of the Pomeroy stories, “Call Me Pomeroy,” which reprints the first three stories and adds a fourth chapter to what is sure to become Pomeroy’s epic ride to stardom.

Reading through the first three Pomeroy stories again back-to-back was a more rewarding experience than I expected. There were many things in the stories I had forgotten since the last read, and refreshing myself with the character and his surroundings was like seeing an old, narcissistic (but well-meaning) friend again. For those who aren’t yet familiar with Pomeroy, he’s a foul-mouthed street musician, just out on parole, looking for stardom on the streets of Oakland during the Occupy movements. In and out of jail through his adventures, he travels from Oakland to London to Ireland as he chases an elusive recording contract. Along the way, he hijacks a ferry boat with Sam the Poontang Man and talks cockles with Sweet Molly Malone, among other notable characters.

In the fourth story from the collection—the only story that hasn’t been published here on Empty Sink Publishing—Pomeroy heads to the City of Lights. Named “Pomeroy and the Last Supper,” the story follows the horny vagrant as he goes in cognito through the streets of Paris, stumbling upon a group of nude, feminist protestors aptly named “Femen.” Don’t get me
wrong—I’ve loved all the Pomeroy stories—but this one really hearkens back to the original. The one-liners and jokes zip at you so fast you have to duck to miss them. Our friend is at his randiest—and in the Femen women, he has met his match. The entire thing is a hilarious journey for this unlikely hero.

But there is one scene—one scene—that makes this an incredible story and a brilliant way to cap off the collection. During the fourth story, something happens—you start to see beneath Pomeroy’s charade and more into the man he really is. I have a hard time describing it—it’s like you’re seeing the true character for the first time. And while I’ve sympathized with Pomeroy throughout his saga, I’d never really felt sorrow for the man or his situation until I read the scene where he says goodbye to Femen member Oxsana. It is such a tender scene that, at first, you find it hard to believe it involves the same cantankerous chauvinist you’ve come to know and love. But it fits in with the overall story arc perfectly and brings a bit of humanity to a character who is typically larger than life.

Whether you’re new to Pomeroy or a long-time friend, I would recommend this collection to anyone who can handle a healthy dose of inappropriate humor mixed with satire of modern America. He is an allegory for so many things. But whether you search for meaning within the pages, or simply marvel at the brilliance of the characterization and the hilarity of the action, sit back and enjoy the ride. As Ol’ Pomeroy would likely tell you, anyone who takes a ride on Pomeroy is bound to have a good time.

James Hanna recently released the second edition of “Call Me Pomeroy,” which contains the fifth story in the troubadour’s saga, “Pomeroy and the Black Widow.” We start right where we left off, with Pomeroy in prison in Paris. There’s a spine-chilling section right at the beginning where Pomeroy talks about the prison population increasing due to recent terrorist attacks in Paris where “. . . some terrorist dudes been runnin’ around . . . icing fuckers with guns.” The eerie thing is, this story was written months before the recent attacks in Paris.

The rest of the story, however, is a nice shift from the typical rowdiness of Pomeroy’s adventures. Don’t get me wrong—things get hectic here, with naked feminist protesters, explosions and the like. But the most important thing happening in this story (besides the return of Sam the Poontang Man) is the relationship building between Pomeroy and his feminist friend, Oxsana. Pomeroy is both gentle and detached in his approach to this relationship, and the results are touching and hilarious.

This is not the last Pomeroy story—it ends with Pomeroy heading to the airport to go back to America. I have no doubt his adventures will continue. What’s interesting is what Hanna is doing here: he’s serializing this character’s story, but instead of selling the stories individually, he’s publishing them as an ever-growing book. Ultimately, I think this is a good thing: if it allows authors a little more creative freedom, then I’m for it. But the process for getting the new edition was slightly confusing. If this becomes a trend for authors, Amazon would do well to build a more robust system for delivering both information and updates to customers who have older editions, like me.

Overall, “Pomeroy and the Black Widow” is a wonderful addition to this anti-hero’s story, and adds depth to both the character and our understanding of him. I look forward to seeing where Hanna takes his creation in the future.

Read our interview with James Hanna to find out what drives this prolific author.