Victoria Barycz became a writer when her elementary school told her she couldn’t use her fists to express rage. She prefers poetry that tells the truth and fiction that blurs it. Barycz has been published in Pithead Chapel, Gravel Magazine, Foliate Oak Literary Magazine and The Examined Life.

“Rites of Passage” portrays domestic violence in a startlingly blunt and descriptive narrative. What inspired this story?

Some families have legacies of greatness. My family has one of violence and adversity. I am the third generation of abuse. Where my mother remained a victim her entire life and my father became his father, I became a survivor. My mother somehow instilled in me a strength she could never find for herself and it allowed me to be defiant. Oppositional defiant, my father was fond of saying. The events in this story are all things that shaped my childhood and writing.

The mother in the story tries to help the narrator by telling her stories of death rituals of various cultures. How much research did you do to make sure you had these details correct? 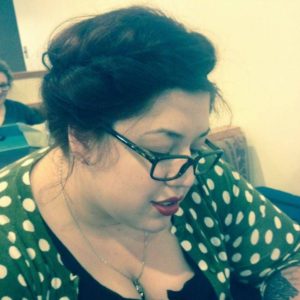 While my mother was alive she taught history and social studies so my siblings and I grew up with a love for learning. For this piece, it’s really a culmination of the stories I’ve heard my entire life as well as stories I read about during college. So, I guess it’s been a lifelong learning experience.

In the last scene, so much about each of the characters is revealed in less than 150 words. In general, it’s amazing that you packed so much story, emotion, and life into a work of less than 700 words. How much editing did it take to get this piece in the shape it’s in now?

Honestly? A couple hours. I was in the middle of writing the novel I’m currently working on and something sparked. I switched over to a blank page and just wrote until I felt satisfied. Whenever I’m writing a piece that uses repetition structure I always stop at three examples. One of my English teachers in high school loved to tell me that three was the sweet spot in literature. It’s one of those things that I’m always conscious about now and I’ve found that when talking about difficult subjects it works without smothering the reader. I found Empty Sink the same day, submitted it and here we are.

If you could have dinner with one writer, living or dead, who would it be and where would you eat?

Dean Koontz. His ability to combine the everyday with the fantastic is sublime. There’s this tiny burger joint called Abby Lane in Clinton Township. It’s not fancy, jammed in between a vacant building and a nail salon, but it has some insanely good food. The owner is probably the grumpiest human being alive and acts like everything is an inconvenience–it’s spectacular. It’s exactly the setting and cast that Mr. Koontz would create.

When was the first time that you consciously felt your life affected by art; what was the art form and who was the artist?

There are these condensed kid’s versions of classic novels that you could get for like pennies at the corner store near my childhood home. Every payday my mother would bring several home for us, and one day she brought me the works of Edgar Allan Poe. It had pictures and I just remember staring at Montresor bricking Fortunato up behind the wall of the wine cellar and there was this feeling in the pit of my gut that lingered for days. It was Poe’s fearlessness of death, of seeming odd, of poking into the dark corners of man that resonated with me.

If you could only read one book for the rest of your life, what would it be?

Harper Lee’s To Kill a Mockingbird. Beyond its excellent commentary on race relations in America, it’s about the loss of innocence and the impact parents have on their children. I think it is one of the very few classic novels that transcends its time for young readers.

If you could give one piece of advice to aspiring writers, what would it be?

Learn to write scared. There are going to numerous times in your life when you are scared so harness it, document it, share it.

What inspires and drives you when you create fiction?

Children. I haven’t forgotten how dangerous it is to be a child, and in a way, it’s like that’s the story imprinted on my bones. I grew up in South Warren, a poor area of Metro Detroit where children wonder if they are going to eat today, if someone will hurt them, if someone could possibly love them.

It’s a nearly impossible cycle to break out of and so many of my peers are stuck there, living out the same lives that their parents did. I know so many bright, beautiful, talented children that were crushed and destroyed before they even had a chance to blossom. That’s what drives me. I felt alone growing up and it was writing and literature that saved me. If I can give one kid a moment where they don’t feel alone, where they can see that someone knows exactly how hard it is to put one foot in front of the other, then I’ve done my job as a writer.

What role do non-literary art forms such as film, music and visual arts play in your writing, if any?

It’s ironic, my entire life I’ve had teachers and professors tell me that I shouldn’t listen to music when writing, but without music, I don’t think I’d be a writer. In terms of storytelling, music is the quickest and often most efficient way of creating a specific emotion. I listen to songs on loops keeping myself in the exact emotion I need for a piece. It’s like emotional transference. The song for Rites of Passage is All our bruised bodies and the whole heart shrinks by La Dispute.

What advantages does a sudden fiction like this piece have over a longer, more detailed story?

Topics that are difficult to digest are constantly in danger of desensitizing the reader, so you deliver it in vicious quick bites. When I first started trying to put to paper what happened to me I thought it was necessary to include everything or else I was doing a disservice to what happened. It wasn’t until I started taking writing classes that I transitioned from writing for therapy to writing for an audience.  Sudden fiction drops you into a moment, into a specific emotion, then spits you back out into the real world before you can process what happened. I think it throws the emotional equilibrium off, and the reader is forced to take time, sometimes days, to decompress because the work wasn’t long enough for the traditional falling action to occur.