My mother was turned to ash exactly one month before my twenty-second birthday. It was done with very little fanfare, a switch pulled, a button pushed. It wasn’t what we talked about my entire life around our kitchen table. If any of us died, we wanted a Viking burial, you know, laid out on a small boat while the rest of our family launched flaming arrows at it. My mother needed to romanticize death since we dealt with it on an almost daily basis.

I was eight when she came home to find me tied to a kitchen chair covered in my own vomit. We stared at each other in silence and slowly, quietly–listening for my father–she moved around the kitchen, wetting a towel, filling a glass of water. With barely a sound she cleaned my face, and neither one of us spoke or even breathed until we heard my father snoring from the front room. Only then did she push back my hair, strands stuck to my cheek with vomit and Brussels sprouts, and whispered in my ear about a tribe in South America that has a funeral rite where they ingest the hearts of baby goats. It made them strong through their time of grief, both the act and the iron-rich blood.

On my tenth birthday I received, among the brightly wrapped gifts, my first punch. My father’s knuckles hit the flesh of my right cheek, then his quick fingers shoved my face into what was left of my cake until I could feel the hardness of the table underneath. Afterwards when he stormed out, my mother cleaned me up and told me a story about how the Greeks used coins–drachmas–to pay for passage to the afterlife. It was to pay the greedy ferryman, she whispered, as she offered me some of the frosting from my own cheek. He needed at least two coins to take you to judgment, but a clever hero could trick the ferryman, offering to pay him double when they reached the banks of the afterlife then jumping out before he can collect.

In certain parts of the world, when a man dies, his wife is supposed to commit self-immolation to join her husband in the afterlife. My mother told me that after my father held my face inches from the lit burner of our stove, his hand wrapped in my hair, the other on my neck. He told me he could kill me and no one would ever find out. Then he told me to stick out my tongue, and I could taste the heat of the metal coil as he asked if I was done mouthing off. Later, when my mother washed my face and burnt hair in the sink, she told me she had heard of a woman who knew she would be dragged to the flame. Under the cover of night, she made a dummy out of straw, dressed it in her clothes and laid it to sleep in her bed. When the dawn and the men came, she was gone.

By the time I was seventeen, I was fluent in funeral rites, and as I stood face-to-face against my father, warning him to put me in the ground or I would do it to him, he flinched. When he drove away from our home, I fell back onto the worn couch and looked at my mother standing in the doorway.

“Do you have a story for me?” I spit out as I rubbed my cheeks.

And while I’ll never forget the way her eyes filled like she was the one who had been slapped and her little hands curled together, it’s her words that still wake me up on nights when I’ve eaten right before bed. 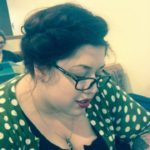 Victoria Barycz became a writer when her elementary school told her she couldn’t use her fists to express rage. She prefers poetry that tells the truth and fiction that blurs it. Barycz has been published in Pithead Chapel, Gravel Magazine, Foliate Oak Literary Magazine and The Examined Life.

Read our Q&A with the author here.